NHL Rumors: Penguins and Jarry, the Stars, Oettinger and Robertson 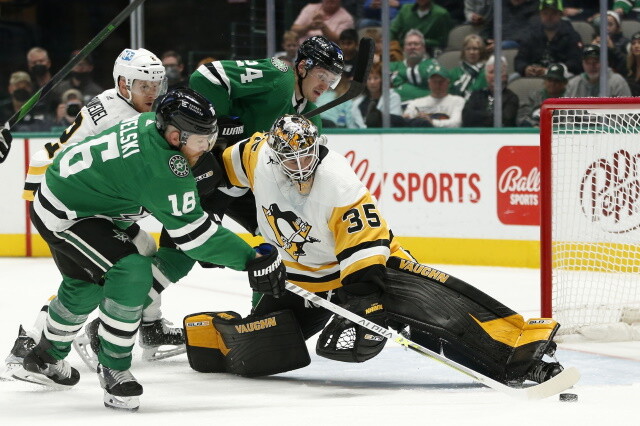 Dan Kingerski of Pittsburgh Hockey Now: Pittsburgh Penguins 27-year-old goaltender Tristan Jarry will be an unrestricted free agent after next season. Jarry and Alex Nedeljkovic will be the only UFA goalies that will be younger than 34 years old.

The cost of Jarry’s next contract is getting bigger. The Penguins have $62.5 million committed to 16 players for the 2023-24 season, so they’ll have room to work with.

It could take a five to seven-year deal and in between $6 million and $7 million.

Little talk between the Stars and Jake Oettinger. Jason Robertson having issues as well

Sources on both sides have said there has been little talk on a new deal. Oettinger isn’t directly involved and is letting his agents handle it. He wants to stay with the Stars.

There aren’t many comparables for Oettinger. Carter Hart‘s three-year, $3.979 million cap hit is one, but he had a larger sample size by the time he was 23 years old.

Thatcher Demko was 25 years old with less starts and he signed a five-year, $5 million per deal with the Canucks.

The Stars also need to re-sign 40-goal scorer Jason Robertson, and sources saying those talks have had their own issues as well. He could settle for a short-term deal. A long-term deal could cost more than $8 million.

Oettinger is open on term and would be happy sign long-term but there isn’t as much flexibility when it comes to term. A source said that Stars aren’t concerned about an offer sheet as Oettinger wants to be in Dallas and they would likely be able to match. A deal over $6.3 million may give them pause with compensation being a first, second, and third-round pick or over $8.4 million AAV with two firsts, a second and third.