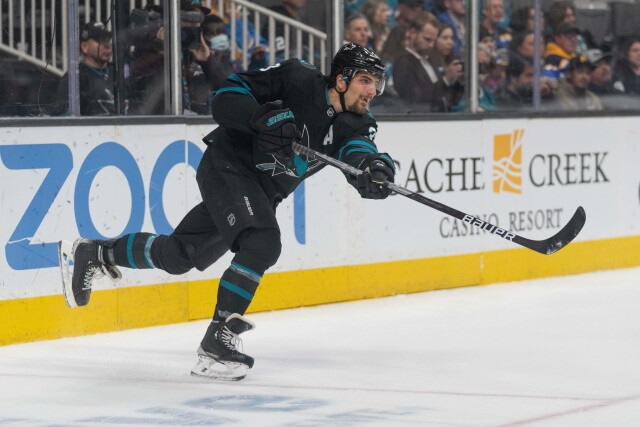 Wait, what?! Michael Raffl will play in NLA in the next season? Wow! This guy is absolutely legit NHLer, he was one of the best defensive wingers this last season. Interesting. pic.twitter.com/yvTovBZy8n

The Devils have $73,375 in projected salary cap space with 22 players under contract and one player on the IR.

Fabian Zetterlund is their only remaining RFA.

Frank Seravalli: The Devils and Wood had filed their arbitration numbers for a hearing that had been scheduled for Saturday.

“Mario has shown that he is a dynamic and reliable defenseman for our club, skating top-level minutes against the best competition every night and delivering solid results,” said Grier. “His energy and work ethic are the reason why he has achieved so much in his early part of his career, and we look forward to watching him continue to grow and elevate his role on the team.”

Elliotte Friedman: Ferraro’s four-year deal will have an AAV of $3.25 million.

Puck Pedia: The Sharks now have a projected salary cap space of $412,500 with a 23-man roster – 12 forwards, eight defensemen and three goalies.

The contract takes up all four of his RFA years and he’ll become UFA when the deal expires.

Here are Ferraro’s microstats from the 2021-22 season. Allows opponents to gain the zone a lot, but decent at preventing rush chances once they’re there. Not a big factor and pretty turnover-prone in transition. pic.twitter.com/0qZYvA7Z8L