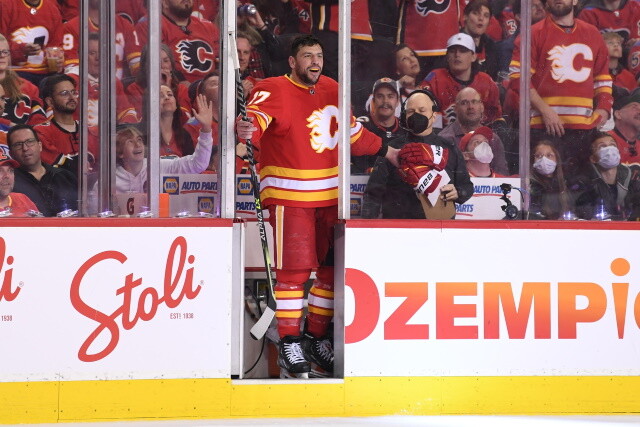 Could the Bruins bring Milan Lucic back?

Jimmy Murphy of Boston Hockey Now: Could the Boston Bruins be interested in bringing back Milan Lucic?

Lucic is in the last year of his deal and carries a $6 million salary cap hit.

A source said on Sunday night that Calgary Flames GM Brad Treliving could be willing to retain some salary if the ‘Bruins sweetened the deal.’

David Perron never got a contract offer from the Blues

Jeremy Rutherford of The Athletic: David Perron signed a two-year, $9.5 million deal with the Detroit Red Wings after not getting a contract offer from the St. Louis Blues.

Before this past season, the Blues had offered Perron a two-year, $8 million, which he obviously declined. Another source said it was a one-year, $4 million offer.

Perron’s agent, Allan Walsh, and Blues GM Doug Armstrong didn’t speak during the season but did have some talks before the draft, though nothing serious.

There were four to six teams that had serious interest in him when free agency opened, but some depended on whether those teams could sign other players.

Changing the Sharks identity, culture, and being patient

Corey Masisak of The Athletic: (mailbag) San Jose Sharks GM Mike Grier made it clear in his press conference that he wanted to change the Sharks’ identity and culture since taking over. He gave Brent Burns a chance to win elsewhere as the Sharks won’t be competing for a Cup.

Grier hasn’t gone into specifics about the team’s long-term plans. It’s not going to be a full tear down and he expects them to be competitive this year. It doesn’t seem like he’s actively looking to move out players to help secure a top-three pick in the draft next year.

They’ve added some veterans which blocks some young players but it allows them to be patient.

Defenseman Markus Nutivaara could improve his value this season and the Sharks could look to trade him before the deadline.

The Sharks could enter next season with three goalies on their roster – James Reimer, Kaapo Kahkonen and Adin Hill. They could look to move one of them or Hill could be put on waivers.