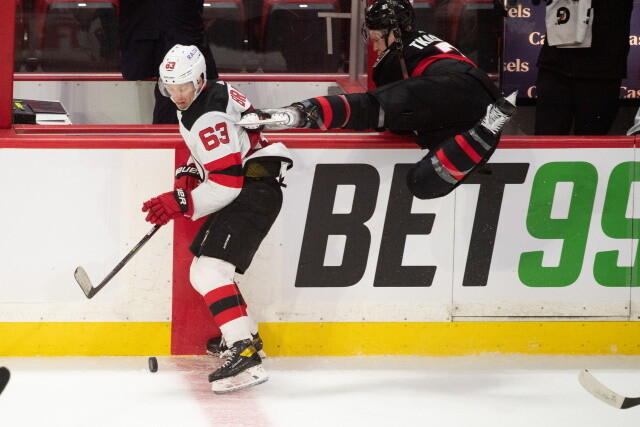 The signing puts their projected salary cap hit at $6.8 million over the cap ceiling with 21 players under contract – 12 forward, seven defense and two goalies.

Ryan McLeod is their remaining RFA.

Daniel Nugent-Bowman: With McLeod still needing a contract, the Oilers are going to have to make at least one trade to get salary cap compliant.

New Jersey Devils: The Devils and forward Jesper Bratt avoided salary arbitration and agreed to a one-year deal worth $5.45 million. He will be an RFA again at the end of next season.

Cap Friendly Depth Charts: Most points by players taken in the 2016 draft and where they were selected.

Jesper Bratt, signed 1x$5.45M by NJ, is a speedy offensive winger who was one of the best in the league this year at creating scoring chances. Ranked among the top forwards in shot assists, high-danger passes, chances, and rush offence in 2021-22. #NJDevils pic.twitter.com/RViJToIUk4

Jesper Bratt has re-signed with the New Jersey Devils to a one-year deal with an AAV of $5.45M. Bratt is legit 1st line winger, one of the most underrated players in the NHL. A bit risky deal for the Devils, Bratt could get much more $ in next deal. pic.twitter.com/kctc9NTQFv