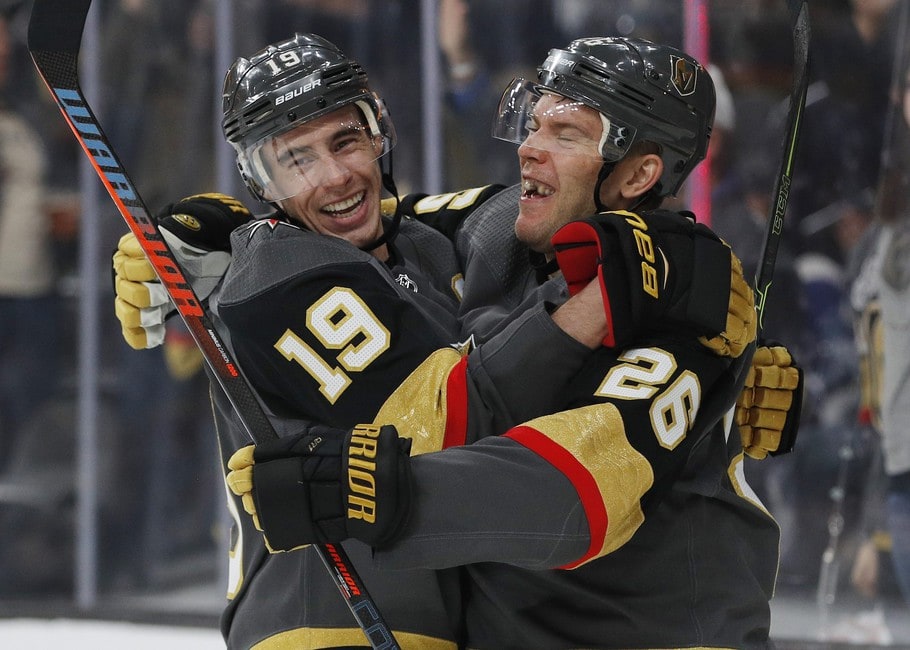 One quick glimpse at the Vegas Golden Knights’ cap sheet reveals what remains, even after offloading the $12 million owed to Evgenii Dadonov and Max Pacioretty this offseason, a pretty dark reality. It’s worth noting, however, that things aren’t as bad as the capped-out 16-man roster might suggest. That cap figure of roughly $83.9 million includes Shea Weber’s long-term injury reserve (LTIR) cap hit, along with the salaries of possible LTIR candidates Laurent Brossoit and Nolan Patrick.

Depending on how things shake out, the Golden Knights actually have somewhere between $6.5 and $10 million to spend in order to fill out a roster still in need of some tweaking. A good chunk of that will be earmarked for the new contracts owed to restricted free agents Nicolas Roy, Keegan Kolesar and Nicolas Hague and more will likely be absorbed by non-roster call-ups (Sakkari Manninen and Logan Thompson are among those who could be on the opening night roster).

Still, there might be a little wiggle room here – and a possible need up front. Even once Roy and Kolesar are signed and in uniform, the Golden Knights’ forward corps will feature only 11 skaters (12 if we include Manninen). Given the injury issues the club has grown so accustomed to and some question marks in the bottom-six, another forward couldn’t hurt. And suddenly, Vegas has the means to add. So, who could it be? Here are some options:

A reunion with former Golden Knight Paul Stastny could make a lot of sense, especially at a bargain price. The team doesn’t appear to need more center depth and the 36-year-old free agent probably isn’t a viable top-six option anymore, but he still carries value coming off of a 21-goal season.

Stastny demonstrated his versatility throughout the lineup in Winnipeg last year, contributing on multiple lines both down the middle and at left wing. He would join a group that includes Roy, Chandler Stephenson and Brett Howden, all of whom can be plugged in anywhere when needed. That versatility and veteran know-how, to say nothing of familiarity with the organization, would be invaluable, especially in light of how things fell apart last season.

The question of where goals will come from this year hasn’t gotten nearly enough attention to date and represents a real concern heading into training camp. Sure, a return to health from the likes of Mark Stone will help and some internal improvement can be anticipated, but finding a way to make up for the 39 goals lost in the departures of Pacioretty and Dadonov is no easy feat.

Could Phil Kessel help? Prior to last season’s eight-goal debacle, he demonstrated consistent goal-scoring prowess. Last year’s sharp decline invites no shortage of concern for a guy who will be 35 once the 2022-23 season kicks off, but that can also be at least partially explained by his role on the lowly Arizona Coyotes. Lining up alongside a William Karlsson or even experimenting with a Kessel / Jack Eichel pairing could spark something in the 399-goal scorer.

Was last year’s 19-goal campaign an outlier for Evan Rodrigues? The perception of a possible mirage seems to be the hold-up keeping the current free agent and former Pittsburgh Penguin from finding a home, preferably at a raise from the $1 million he earned last season.

Hockey people love Rodrigues’ tenacity and versatility as a rugged fourth-liner who also looked comfortable playing alongside Sidney Crosby at times last season. That sounds like a Vegas guy through and through – at the right price, that is.

As a Golden Knights writer, I’ve come to learn never to rule anything out entirely when it comes to this organization. There seems to be no rational scenario that would land Nazem Kadri, far and away the best remaining free agent, in Vegas. You know, just like there was no clear path to adding Eichel last year. Instead of merely pointing out that cap concerns make it highly unlikely that he will be Nevada-bound, why don’t we explore how it might just be possible?

If general manager Kelly McCrimmon, club president George McPhee and owner Bill Foley decide they want to pursue Kadri, there’s a way to get there. Signing him would require finding a new home for Karlsson’s $5.9 million cap hit, plus unloading other contracts to close in on the roughly $7-8 million needed to ink the reigning Stanley Cup champ. As such, I would file this one under “stranger things have happened”.

The cap-related logistics here remain to be seen, as Vegas’ financial situation still hinges on the next contracts of restricted free agents Roy, Kolesar and Hague. What’s clear, however, is that the losses of Dadonov and Pacioretty leave the Golden Knights challenged to replace their offensive contributions. Internal improvement will hopefully offset some of the losses, but so too could signing the right value addition in free agency.

I may be a Leafs fan at heart (I’ve witnessed their highs and lows first-hand as a Scotiabank Arena employee), but I’m also a veteran freelance sportswriter who loves a good story. And there’s been no better story in hockey over the past few years than the Vegas Golden Knights. I’m excited to be covering the NHL again on the Golden Knights’ beat.