Devils: The Time to Trade Miles Wood Is Approaching 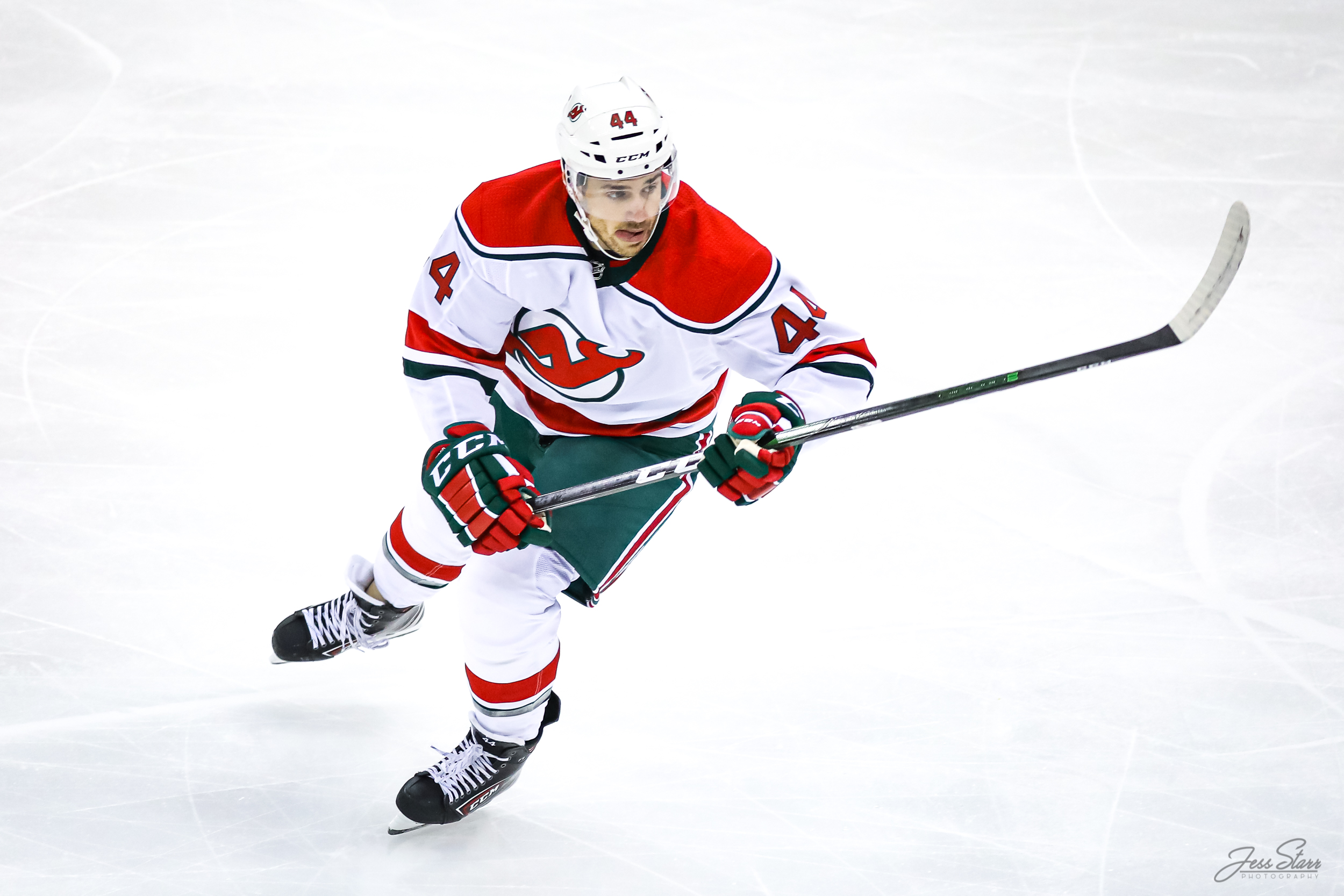 Following the one-year extension Jesper Bratt and the New Jersey Devils came to terms with yesterday, the club now has $3.2 million left in cap space. The final two tasks they must take care of are signing their remaining restricted free agent (RFA) forwards, Fabian Zetterlund and Miles Wood.

The Buffalo-born Wood is entering his eighth NHL season, all with the Devils, and has his arbitration date set for this Saturday, Aug. 6. The left winger has had the privilege of being named an alternate captain for the club during the 2020-21 season, but his time of wearing the “A” on his sweater may be coming to an end soon.

It would cost the Devils $3.5 million to qualify the former 2013 fourth-round selection, which would put them over the salary cap floor. There are a number moves the team could make to ensure they won’t go above that floor, but we’re not going to get into all of that right now.

Following his entry-level contract, then general manager (GM) Ray Shero locked Wood up for the next four seasons at an annual average salary (AAV) of $2.75 million that expired this past season. The Devils could try to extend the fourth liner at around that price and keep the AAV in a similar range before the arbitration date, but one should assume he won’t take anything less than the qualified minimum.

Whether the number to keep Wood on the roster stays at $2.75 million, increases to $3.5 million, or exceeds both, it is simply too hefty of an investment for a winger who has a career average of just above 13 minutes on ice per game. These minutes on ice suggest that the 26-year-old, soon to be 27, will continue to be on the fourth line. For comparison, New Jersey most likely won’t have another fourth liner making above $1 million for the 2022-23 season.

For a comparison around the league, fans should take a quick look at Toronto Maple Leafs forward Alexander Kerfoot. The former 2012 fifth-round selection of the Devils is set to make $3.5 million this upcoming season north of the border. He has played the majority of his time on the second and third lines with the Colorado Avalanche and his current team.

In his five-year NHL career, Kerfoot has already appeared in more games than Wood – 360 compared to 326 – and has accumulated 66 more total points – 64 goals and 123 assists for 187 points compared to 65 goals and 56 assists for 121 points. The 27-year-old has also seen more time on ice, averaging above 14 minutes per game. One player will be making $3.5 million to play on the second line in a powerful offense, the other is scheduled to make $3.5 million to play on the fourth line in a lackluster offense.

Not only is the investment too much for a fourth liner, but it’s also way too steep for someone coming off a serious hip injury. Wood hurt his right hip two weeks before the regular-season campaign in a preseason exhibition against the Washington Capitals.

Following his injury, he had surgery performed on the hip in November and only saw the ice for three total games during the 2021-22 season, when he shouldn’t have played at all. These rushed appearances came during the last week of March and the first week of April. Following his appearance in an April 5 loss to the New York Rangers, he was shut down for the rest of the season.

Wood didn’t look like himself during the three games and he was a no show on the stat sheets. He didn’t accumulate a single point, had a plus/minus of minus-2, and only mustered two shots on net. He did exceed 16 minutes of time on ice during his final two games, though, which is well above his 13-minute mark average.

What the Devils Should Do

The simple solution is trade him, but there are some complications. Given the severity of the injury and no contract currently in place, the realistic chance of the Devils trading him before the arbitration date is zero. No team will offer a package that would entice GM Tom Fitzgerald and company to ship him elsewhere in the coming days.

Whether in arbitration or right before, New Jersey should come to terms with Wood on a one-year extension and nothing more. Following an extension, the team can then take the trade talks to the next level and decide when and where they could part ways with him.

A one-year deal in this scenario works out well for both sides. For starters, it would be a prove-it deal for Wood. He can use this season to show other teams that the lingering hip injury isn’t an issue while potentially setting up for a bigger payday come the 2023 offseason. Along with that, if he has a solid season up to the trade deadline, he can put himself in a position to join a championship-caliber team, something his former teammate Blake Coleman did in 2020 when he was traded to the Tampa Bay Lightning.

On the other side, the Devils could potentially acquire a better return on the left-handed shot if there is no money tied to him after this season. Continually, looking at the roster construction for this season and down the road, there’s not much room for Wood on this team.

The prospect pool is only getting older and it’s time to see if any of them pan out and have a future in this league. This season will be a good trial for players like Jesper Boqvist, Nolan Foote, Tyce Thompson, and the aforementioned Zetterlund. All these youngsters are viable options to play capable fourth-line minutes, and all come at a much cheaper cost.

All four of these players got the chance to display their talent last season, but they need bigger roles. Boqvist got the opportunity to appear in 56 games, while the other three only saw action in 23 games combined. Foote accumulated four points on three goals and one assist in his seven games, and Zetterlund collected eight points on three goals and five assists in his 14 games. A small sample size, but there is something there with these two.

When the Devils Should Trade Him

Just like I mentioned in the decision with defender Damon Severson, the best – and probably only – option for the Devils would be to dish Wood at the trade deadline. Although I said in the above section that this season would be a good showcase for the younger core – suggesting the Devils should deal him before the season begins – the deadline still makes most sense.

Related: Devils’ Best Option is to Move Severson Before the Trade Deadline

The reason behind this thought process is the fact that not many teams around the league will want the question marks attached with Wood before the season begins. GM’s around the league won’t be chomping at the bit for someone with that serious of an injury and who practically hasn’t played dating back to the 2020-21 season.

Hanging onto Wood until the deadline is a gamble, but one that could pay off. The hope for the Devils, and No. 44, would be that he shines during the regular season and they’re able to pawn him off to a playoff-caliber team. He would most likely be a pure rental for whatever team would take him, but with no money long-term and good numbers already under his belt – in this hypothetical anyway – Fitzgerald can easily find a team willing to acquire him.

One way or another, the Devils need to move on from Wood. He does not fit the mold of a rebuilding team and New Jersey should give him the opportunity to chase a ring elsewhere. He has given the team solid play during his career, but it’s time for the next generation to make their mark.

Nick Stanziale is a THW writer covering the New Jersey Devils. He is excited to put his journalism degree from Marist College to use and to share his thoughts and feelings on the organization. You can follow Nick on twitter for his latest articles and more.