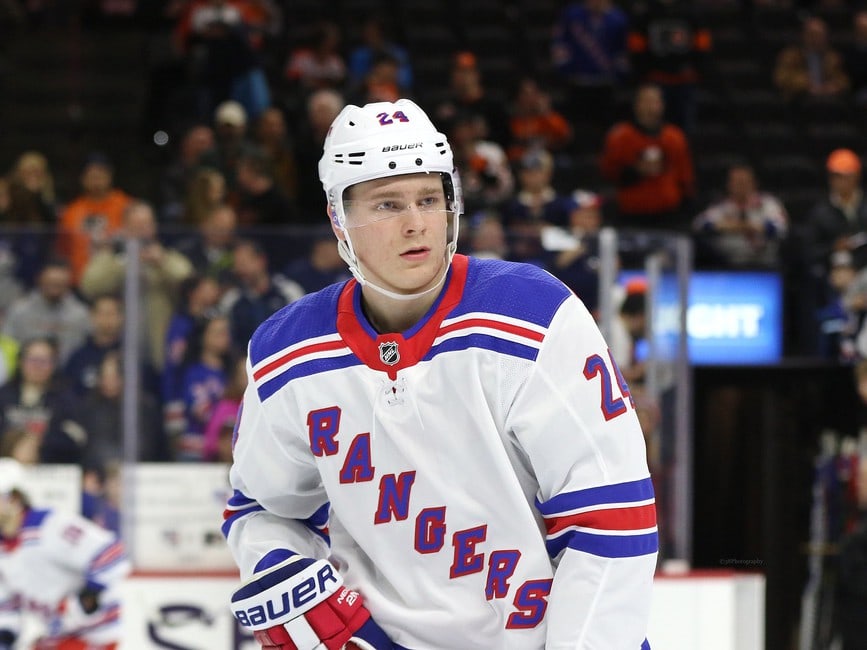 The New York Rangers re-signed former second-overall pick and restricted free agent (RFA) Kaapo Kakko to a two-year bridge deal. They also signed Tim Gettinger, who likely won’t see much time on the NHL roster but could easily make the jump from the minors if a spot becomes available on the fourth line. Plus, the Blueshirts’ 2022 second-round, 63rd-overall pick, Adam Sykora, was signed to an entry-level contract (ELC) and more.

Kakko signed a two-year contract extension with the Blueshirts last week. The Finnish forward will receive $4.2 million in total with a $2.1 million annual average salary (AAV). He had seven goals and 11 assists with a plus-9 rating last season.

He helped the “kid line,” which was also made up of Alexis Lafreniere and Filip Chytil, have a strong playoff run. The trio was the best line on the ice for the Rangers through stretches of their path to the Eastern Conference Final before losing to the Tampa Bay Lightning. However, Kakko was scratched during the series’ final game, so how his offseason would play out after that was in question.

Kakko has played 157 career games in the NHL, all with the Blueshirts, and notched 58 points with a plus-3 rating. His 19 points, while he was still 18 years old during his rookie campaign, tied him for most in Rangers history for 18-year-old players. The 6-foot-3, 205-pound forward from Turku, Finland, will hope to have a breakout season after gaining valuable playoff experience.

The 6-foot-6, 218-pound forward from North Olmstead, OH, was an alternate captain with the Wolf Pack last season. Gettinger had 25 points in 45 games while he played eight games with the Rangers and failed to record a point and has played 16 career NHL games since being drafted in the fifth round, 141st overall, by the Rangers in the 2016 NHL Entry Draft. He’ll make a rate of $750,000 for the season if he’s up in the show and a rate of $100,000 down in the minors.

Drury also announced they signed Adam Sykora to a three-year ELC. The Rangers selected the Slovak native in the second round, 63rd overall, in the 2022 NHL Entry Draft. On July 1, 2022, Sykora was selected first overall in the Canadian Hockey League (CHL) Import Draft by the Medicine Hat Tigers of the Western Hockey League (WHL).

Last season, the 5-foot-10, 172-pound forward played primarily with HK Nitra in Slovak Extraliga, where he had 17 points in 46 games, while notching two goals and three assists in 19 playoff games. He helped the Slovak national team win a silver medal at the 2021 Hlinka Gretzky Cup while also playing at the World Championships for Slovakia.

Austin Rueschhoff, Andy Welinski and Turner Elson agreed to terms with the Rangers. Each player signed a one-year contract; Rueschhoff is 24 years old, while Welinski and Elson are 29.

Rueschhoff played with the Wolf Pack last season, and Welinski played with Calgary Flames’ affiliate Stockton Heat. Elson spent the bulk of his season with Detroit Red Wings’ affiliate Grand Rapids Griffins. Like the Wolf Pack, both the Heat and Griffins are in the AHL.

Rueschhoff is a forward who had 24 points in 59 games with Hartford. Welinski, a defenseman from Duluth, MN, has played in 230 AHL games throughout his career and has 123 points with a plus-3 rating.

Elson has played in 469 AHL games over the course of 11 seasons. The forward from New Westminster, BC, has accumulated 95 goals and 115 assists during his AHL career.

Carpenter Will Add Depth at Center

Ryan Carpenter signed a one-year $750,000 deal with the Rangers. Drury was looking for a center to provide depth at a low cost, much in the mold of Kevin Rooney, and he found that in Carpenter. (from ‘Rangers sign center Ryan Carpenter in NHL free agency,’ New York Post, 7/14/22). Carpenter is heading into his eighth NHL season and has played in over 300 games.

Carpenter played in 67 games with the Chicago Blackhawks and Calgary Flames during the 2021-22 campaign. The 6-foot, 200-pound center grew up in Orlando, FL but was a Rangers fan. His father is from NY, and that’s how Carpenter developed his love for the team.

Scott Blair is an author and journalist from Los Angeles, CA, by way of Detroit, MI. Uniquely diverse experiences have shaped Scott’s life in both of those places he calls home. He is now traveling the world, learning and growing as a human and a writer.  He was a professional hockey player and then turned to the arts, becoming an actor for about 15 years. His passions turned to poetry, prose, politics, and journalism when he got tired of the Hollywood machine and what it represents. Scott is available for interviews and welcomes questions and topic ideas.