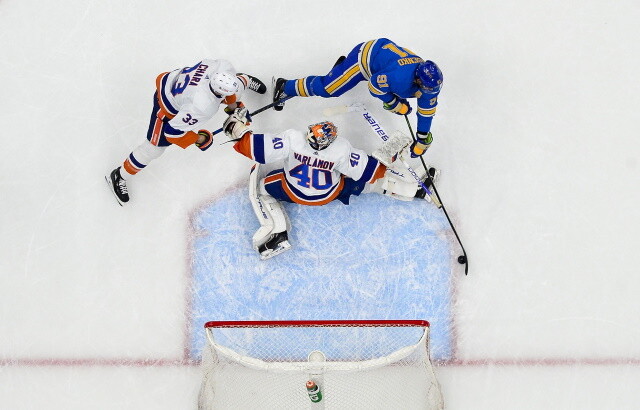 James Nichols of The Fourth Period: It’s believed the New York Islanders are closing on some moves according to David Pagnotta and Mark Seidel. Pagnotta reports they are closing in on ‘multiple transactions.’

The Islanders are deep down the middle, so if they are signing Nazem Kadri, Lamoriello could be looking at moving a player or two to allow the money and fit with the Isles work.

Ethan Sears of the NY Post: If the New York Islanders are signing Nazem Kadri, they’ll likely need to move out some salary before making it official.

The Islanders aren’t really in need of another center, but obviously adding the 31-year center, who is looking for a long-term deal, would make them better.

The Islanders have salary cap concerns. Noah Dobson, Alexander Romanov and Kieffer Bellows will likely be getting extensions.

Trading Jean-Gabriel Pageau and his $5 million cap hit would clear cap space and centerman. The Islanders likely wouldn’t get value for him in their current position. Josh Bailey and Anthony Beauvillier are two other trade candidates.

Forward Casey Cizikas has five years left on his contract at a $2.5 million cap hit.

The Blues would need a top-six if they moved Tarasenko

Dan Rosen of NHL.com: Don’t believe that Vladimir Tarasenko has rescinded his trade request to the St. Louis Blues. The Blues still don’t have to trade him if they don’t want to.

Despite 82 points in 75 games, his trade value may not be high enough for them to get a top-six forward in return, something they’d need after losing David Perron as well.

Tarasenko is 30 years old, in the last year of his contract, and has a history of shoulder injuries. It may not be easy to get a top-six in return.

Ryan O’Reilly is also entering the final year of his contract. It’s possible that one or both gets a contract extension with the Blues.