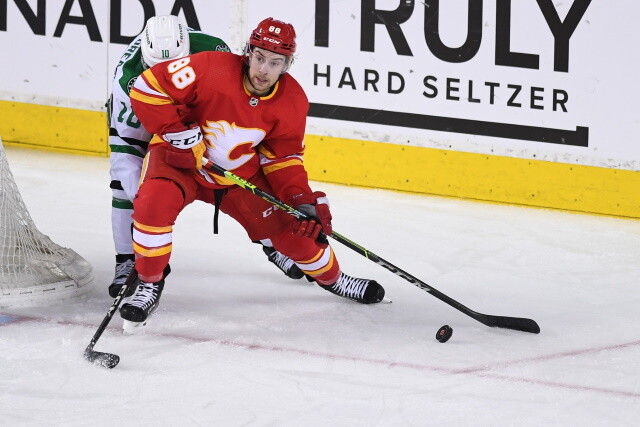 The Predators and Yakov Trenin headed to arbitration

The Predators filed for a two-year contact at $1.35 million per. Trenin asked for a one-year contract at $2.4 million.

Bill Meltzer: The Philadelphia Flyers have re-signed forward Zack MacEwen for one year at $925,000. They avoided salary arbitration. He’ll be an RFA again next year.

Puck Pedia: The Flames now have $2.675 million in projected salary cap space with 21 players in under contract – 11 forwards, eight defensemen and two goalies.

Steve Macfarlane: The Calgary Flames have avoided salary arbitration with defenseman Oliver Kylington and signed him to a two-year contract at $2.5 million per season.

“Again, the team has bought time to work on something bigger in the future and a young player is betting on himself.”

Puck Pedia: Kylington will be a UFA when the deal expires.

Puck Pedia: The Flames now have $8.5 million in projected salary cap space with 20 players in under contract – 10 forwards, eight defensemen and two goalies.

Ken Wiebe: The Winnipeg Jest have signed defenseman Leon Gawanke to a one-year, two-way deal with a $750,000 cap hit.

Mario Tirabassi: The Chicago Blackhawks have signed Jalen Luypen to a three-year entry-level contract with an AAV of $859,167.