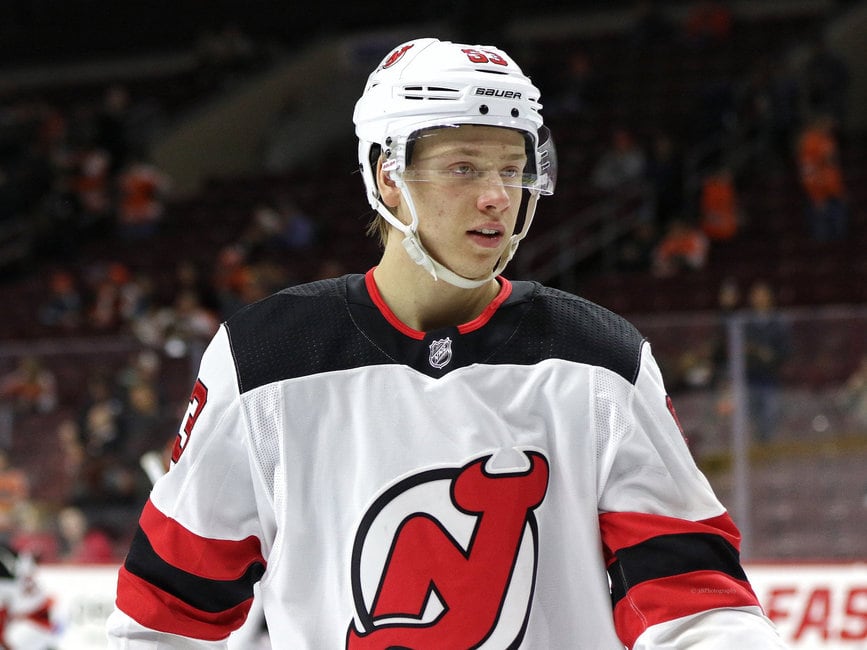 New Jersey Devils fans can now breathe a sigh of relief as the organization announced they avoided arbitration and signed winger Jesper Bratt to a one-year deal worth $5.45 million. At the end of the contract, he will again become a restricted free agent. General manager (GM) Tom Fitzgerald has openly talked about Bratt being a top priority this summer, and finally, he can check that box off his to-do list.

Devils Lock Up Their Man

During his pre-draft media availability on July 6, Fitzgerald reiterated that he intended to keep the young winger in New Jersey. He confirmed the organization had presented Bratt’s camp with an offer but chose not to comment on the specifics.

“We’ve talked to Jesper, and we’ve made him an offer that shows the commitment that David Blitzer and Josh Harris have in this young gentleman for very good reasons. He is a really good hockey player that makes our team better. So that’s negotiations, you make an offer, and you wait to see where his camp is at.”

It took 28 additional days for all parties to reach an agreement. The club made fans sweat as the announcement was not made until 9:54 AM, almost an hour after the arbitration hearing was set to begin. Avoiding the hearing is a victory for both sides, but a “prove it deal” is perfect given Bratt’s situation. For the first four seasons of his career, the Swede could be counted on for 30-35 points. His breakout performance last season earned him more points than Brady Tkachuk and Anze Kopitar.

After the news broke, Bryce Salvador took to Twitter to share his reaction, which was that it was the perfect deal for both sides as the winger gets a chance to show he can replicate last season’s performance and did not need an arbitrator to do so. There is an understanding that players are paid for what they have done, and giving Bratt an opportunity to show last season wasn’t a fluke will end up benefiting both parties in the future.

When Bratt stepped up to the podium in September, he said he wanted to get stronger, faster, and become a more complete player. He went on to say he wanted to become more of a leader and take on a bigger role with the team. Over the next few months, he did just that, proving to be one of the more valuable players on the Devils’ roster. He finished the 2021-22 campaign with a team-leading 73 points in 76 games.

During an episode of Speak of the Devils Podcast, co-host Sam Kasan asked the Devils forward what worked for him this season. “I think it started a little bit last year when I felt like I really started to take my game to the next step, and I feel more comfortable in the system,” said Bratt. “I feel like I was older. I felt like I knew more of how the league works… I want to make a difference to the team, and I think that it comes from a lot of years with hard work…I still have a lot of things that I want to get better at, and I think I can still take my game to a lot higher [of a] level, and that brings me a lot of excitement.”

During his podcast interview with Matt Loughlin and Kasan, the 5-foot-10 forward was brutally honest about this past season. “Playing with a lead was something that we struggled with as a team,” said Bratt. “There were way too many games that we were playing extremely good hockey the first and second period and then kind of collapsed a little bit as a young scared team in the third period, and that’s something that takes time, but we have to get over that bump.”

Bratt echoed what his teammates said throughout the season, and that problem could be rectified now that there are some veterans on the roster, but as the Swede pointed out, while the team is young, they have experience, now entering their fourth and sixth season in the NHL.

Loughlin continued the interview by asking if the team hated to lose enough, referring to a comment made by head coach Lindy Ruff during a post-game press conference. Bratt gave an honest answer that fans could appreciate: “I don’t think so, because I think that if we did, then we would have obviously won more games when entering the third period with the lead. I think that is a learning experience and a phase that this team has to go through now.”

He referenced the team’s win against the Vegas Golden Knights in April and the feeling of coming back and winning a tough game. He talked about it being a team win against an opponent that really needed to win and that the Devils had the ability to crush Vegas’ playoff dreams. Bratt further noted that the team needs to love that feeling more than being scared of losing a game.

Being Part of the Solution for the Devils

According to Andreas Ohren’s Instagram account, Bratt has been going through some intense offseason training. The 24-year-old has not shied away from saying that he feels his game can reach another level and wants to take another step this upcoming season.

“I’m someone that always sets a lot of goals and wants to be better,” he said. “Even when I have really good games, I still have to be better in the next game. I’m going into this off-season with a mindset of helping my team win more games and be better than last year.”

In addition to becoming a leader on the ice, fans are watching Bratt evolve into one off the ice as well. He is not afraid to answer tough questions like the ones Loughlin and Kasan asked during the podcast.

“I’m not going to sit here and be happy with a season unless I’m holding a Cup. I’m still hungry for a lot more.”

This story is far from over, as Fitzgerald might be bracing himself for an arbitration hearing next summer. But for now, all is well in Newark, New Jersey, as the Devils’ top forward looks to pick up where he left off when the season opens in Philadelphia on Oct. 13.

Kristy has been contributing to The Hockey Writers since March of 2021. She is thrilled to be putting her journalism degree to use and is a credentialed correspondent covering the New Jersey Devils. Kristy is also a member of the Professional Hockey Writers Association. You can follow her journey on Twitter @InStilettos_NHL and Instagram SkatingInStilettos.