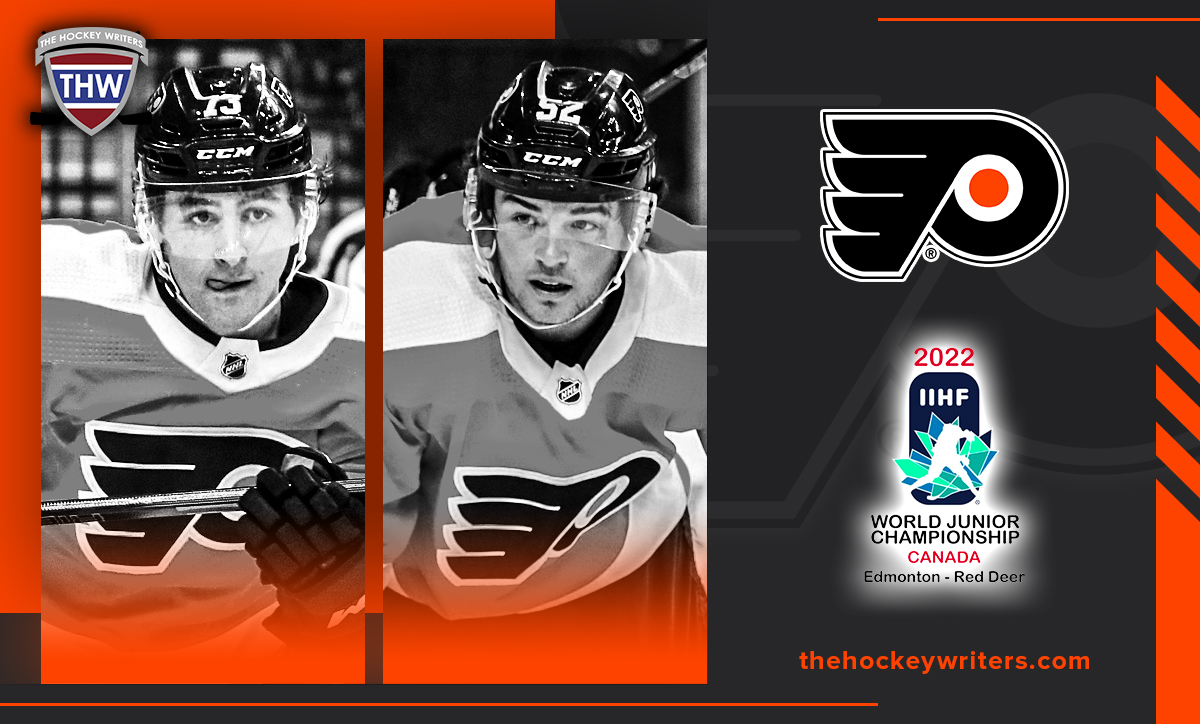 After a mundane offseason, Philadelphia Flyers fans finally have something to look forward to as two prospects will represent their home country at the upcoming 2022 IIHF World Junior Championship. On Monday afternoon, Hockey Canada announced the 25-player roster for the tournament and two familiar names made the cut.

Among the 25 players are prospects Tyson Foerster and Elliot Desyoners, who will have the opportunity to shine during one of the most-watched hockey tournaments in the world. The tournament is set to be played in Edmonton, Alberta, from Aug. 9-20, in which Canada will be a part of Group A with Czechia, Finland, Latvia, and Slovakia.

Scheduled initially for Dec. 26, 2021-Jan. 5, 2022, in Edmonton and Red Deer, Alberta, the tournament was canceled after three days due to a rise of COVID-19 Omicron variant cases among the participating teams. With the tournament being rescheduled, Hockey Canada has an opportunity to show off some of the best young talents the country has to offer.

For the Flyers, having two prospects named to the Canadian roster is a huge plus for the future of the organization as only the best U20 players represent Team Canada each year. This will give Flyers fans the chance to watch these talents prior to the start of the 2022-23 NHL training camp.

The Flyers’ 2020 first-round pick (23rd overall) showed tremendous promise during the pandemic-shortened 2020-21 campaign in the American Hockey League (AHL) with the Lehigh Valley Phantoms. Foerster netted 10 goals and 17 total points over the course of 24 games played with the Phantoms. The opportunity to play in the AHL was made possible after his season with the Ontario Hockey League’s (OHL) Barrie Colts was canceled due to the COVID-19 pandemic.

He returned to the Phantoms the following season but only played in a total of eight games after he suffered a season-ending shoulder injury that required surgery. In those eight games, he struggled to find his game but did not allow that to stop him from making a strong return. During his rehab period, he worked on all parts of his game, his main focus on skating and continuing to develop his fearsome shot. Mike O’Connnell, the Flyers’ Senior Advisor of Player Development, spoke about his development as he progressed before returning to the OHL at the end of the year.

“Totally different. It’s a pro body now. You can tell he’s gained some weight. He looks stronger, he’s leaned out for me. He was never heavy, but you can look at a player over the last 3 or 4 months, and I see a huge difference in his physique and the way he carries himself. He’s eating properly. It’s very noticeable because I haven’t seen him in 3 or 4 months,” he said.

“Again, he had a difficult year last year with injuries. He’s obviously feeling good about himself. He has to be feeling good about the way he is physically right. Hopefully, everything goes smoothly for him and he competes for a job here in Philadelphia. That’s the goal; he’s a young prospect. He’s suffered some injuries, but let’s hope he’s on the right path right, that he continues to build strength and confidence, so that he’s on the ice here next year in Philadelphia.”

For Team Canada, he brings experience and skill to a team loaded with talent. As previously mentioned, his shot is his biggest weapon on the ice. His ability to score from anywhere on the ice will be a huge advantage in a tournament filled with young talent. If he is able to make a name for himself during the three weeks, Flyers fans will have even more to look forward to once he returns to the orange and black.

Thought to be one of the more electrifying prospects in the Flyers’ system, Desyoners has a lot riding on his performance at the World Junior Championship. He was selected in the fifth round of the 2020 NHL Entry Draft after the organization traded two seventh-round picks to get in position to draft him. The 20-year-old forward quickly became a fan favorite for his tenacity on and off the ice.

He spent the last two with the Halifax Mooseheads of the Quebec Major Junior Hockey League (QMJHL), where he truly made a name for himself. Over the course of the last 100 games, he put up a total of 137 points (63 goals and 74 assists), making him one of the highest-scoring prospects in the Flyers’ system. Elite Prospects calls him “a player who will selflessly run head-first through a brick wall if that’s what’s necessary for his linemates to succeed.”

Fans have all the more reason to be excited for his arrival as he will showcase his talents on one of the biggest stages hockey has to offer. The fiery forward will play alongside 17-year-old phenom Connor Bedard, Anaheim Ducks prospect Mason McTavish, and a fellow Flyers prospect just to name a few. Despite the number of talented players on the roster, he will have an opportunity to prove his worth at the WJC.

For Team Canada, he will provide a spark to the lineup while being able to put the puck in the back of the net at any given time. His chippy style of play will be a huge upside, especially as he heads toward training camp in the next couple of weeks. This opportunity will allow him more time to develop his talents before he expects to turn pro this upcoming season.

Both Foerster and Desyoners have a huge opportunity to put the Flyers on the map as they compete with some of the best young talents in the world. The World Junior Championships are not for the faint of heart, but these prospects are more than ready to prove why they deserve a shot. All the reason more for fans to be excited about their arrival to the NHL in the next couple of seasons.

Bobby Bader Jr. is a freelance journalist born and raised in Philadelphia, PA covering the Philadelphia Flyers for The Hockey Writers since the start of the 2020-21 National Hockey League Season.  He currently works with the Hershey Cubs Hockey Club (USPHL Premier) as the team’s media coordinator and serves as the Assistant Sports Information Director at Penn State Harrisburg. For interview requests or to provide content info, follow Bobby on Twitter or his social media accounts. They appear under his photo in articles like this one.