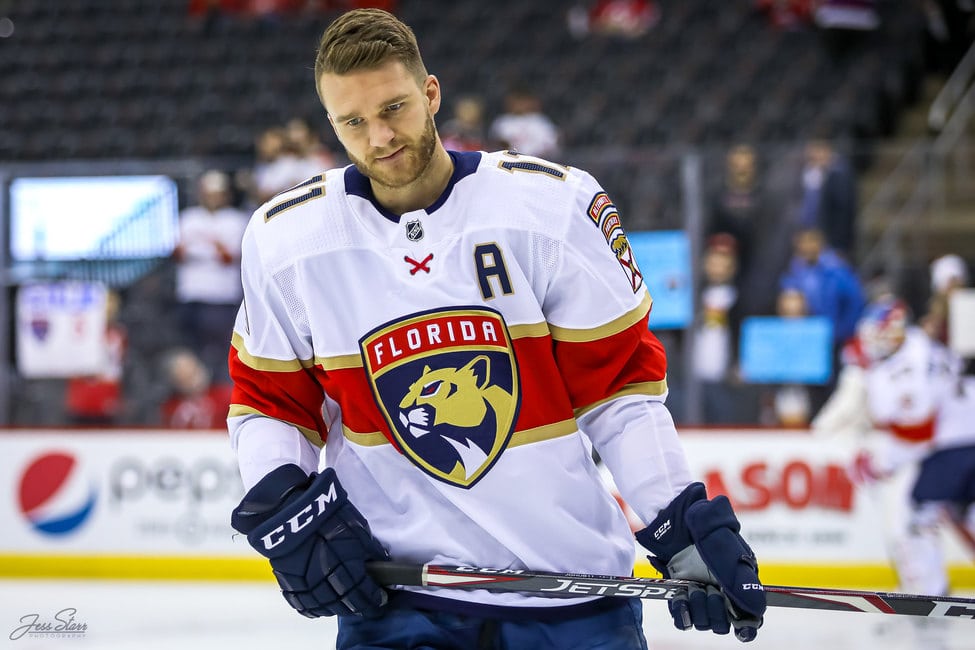 In today’s NHL rumors rundown, the Calgary Flames met with Jonathan Huberdeau to potentially talk extension. Meanwhile, the Boston Bruins know they have to clear cap space. How will they do it? There are updates on Patrick Kane and Jonathan Toews out of Chicago and how likely is Chuck Fletcher to make it through the season in Philadelphia? Finally, Kirill Kaprizov is on his way back to Minnesota.

Huberdeau and Flames Already Getting to Work?

As per Elliotte Friedman, “Apparently, Calgary GM Brad Treliving and newly-acquired Jonathan Huberdeau had a “get-to-know-you” dinner tonight in Montreal. The two wanted to meet in-person, and made it happen.” Player agent Allan Walsh confirmed the same and wrote, ”Kudos to Brad for coming out to Montreal to meet with Jonathan so they could spend some time together, getting to know each other.”

While there wasn’t an extension in place when the Flames traded Huberdeau, it was clear the team wanted to extend him and he said he was open to the idea of a long-term deal. The sooner the Flames know his intentions, the sooner they can plan their future.

Kevin Paul Dupont of The Boston Globe says the Bruins are likely to try and clear salary cap space in an effort to sign Patrice Bergeron, David Krejci and Pavel Zacha. They have around $4.8 million in salary-cap space and it will take more than that to get those deals done.

With Brad Marchand and Charlie McAvoy on long-term injury reserve until they return from offseason surgeries, the Bruins will get some extra space early. But, around December 1, they’ll need to shed some salary.

If Sweeney is forced into a Bjorkstrand-like gift situation, the likeliest to go could be winger Craig Smith ($3.1M/one year), whose production was spotty and frustrating last season. Perhaps a new coach will wring more out of him, if he doesn’t end up the collateral damage for the younger, bigger, and perhaps more versatile Zacha.

Update on Blackhawks Kane and Toews

Dupont also writes, ”It increasingly looks and sounds as if the Blackhawks will move longtime franchise pieces Jonathan Toews and Patrick Kane, each about to enter the final year of their megadeals that carry $10.5M cap hits.”

He adds that Kane remains a productive player and that a team like Detroit — who has young stars and improving — or Anaheim — who have cap space and warm weather —might offer a two- or three-year extension at a decent dollar.

Fletcher on Hot Seat in Philadelphia

As per Charlie O’Connor of The Athletic (mailbag), Flyers’ GM Chuck Fletcher could be on the hot seat in Philly if his offseason doesn’t improve and his team isn’t noticeably better. Choosing not to make room for Johnny Gaudreau and thinking Anthony DeAngelo and Nicolas Deslauriers would move the needle could prove costly.

Fletcher appears to be pinning much of those hopes on the impact of John Tortorella, who he believes will reinstitute structure, accountability and help foster a team-wide identity for the club. Does Fletcher expect that Tortorella can make the Flyers great in 2022-23? Nah. But he fully believes that Tortorella can make them better, so long as the club doesn’t deal with the same rash of injuries that it suffered last season.

If Fletcher’s bet that a new coach with a similar roster doesn’t pay off, he could be in trouble. O’Connor writes that a lot needs to break Fletcher’s way “and why I remain skeptical of this overarching plan. But it is a definitely a plan.”

Kaprizov Heading Back to Minnesota

Minnesota Wild forward Kirill Kaprizov has successfully returned to the United States from Russia, according to a report by The Athletic‘s Michael Russo. After being detained, Rosso writes that the forward left Russia through Turkey last week and arrived in New York City. He is scheduled to fly to Minnesota on Tuesday.