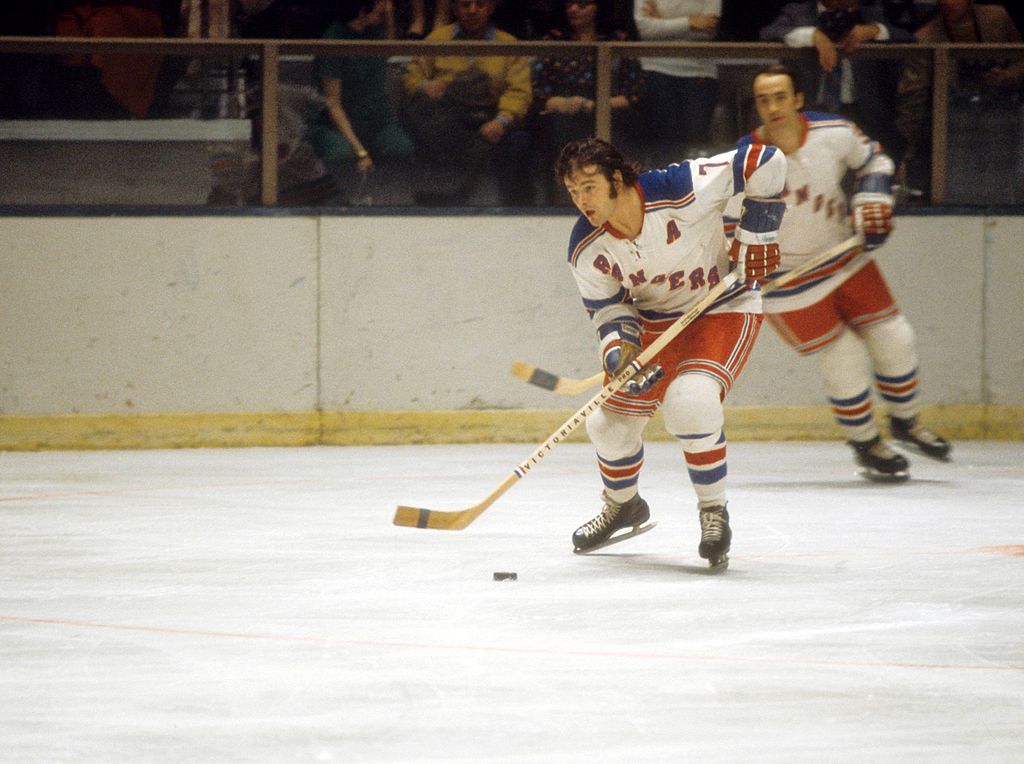 Aug. 1 is a great date in the history of the New York Rangers as they signed a future Hall of Famer who went on to rewrite their record books. Also, two Canadian teams made some memorable moves, and a historic name took a new job with the most storied franchise in National Hockey League history. Plus, the NHL returns to the ice after a pandemic shuts down the world.

The Rangers signed the greatest goal scorer in their franchise’s history on Aug. 1, 1961. After a very successful junior career with the Guelph Royals in the Ontario Hockey League (OHL), Rod Gilbert signed his first NHL contract with the Rangers on this date.

Gilbert retired 19 games into the 1977-78 season. He spent his entire career with the Rangers, playing 1,065 games and scoring 406 goals and 1,021 points. He is still the franchise’s all-time leader in both goals and points.

The COVID-19 pandemic that is still affecting the world today put a stop to sports all around the globe. The NHL postponed the 2019-20 season on March 11, 2020, and did not return to the ice until Aug. 1, 2020. The league held an expanded Stanley Cup Playoffs, with Edmonton hosting all the Western Conference teams and Toronto getting the Eastern Conference teams.

The field was expanded from the standard 16 teams to 24 teams, with the top four teams in each Conference getting a bye. Those teams played a round-robin to determine their seeding while the other eight teams squared off into a best-of-five series dubbed the Qualifying Round.

The first game back saw the Carolina Hurricanes beat the Rangers in Toronto, 3-2, with Martin Necas netted the game-winning goal. Other action from a busy first day back saw the Calgary Flames beat the Winnipeg Jets, the Chicago Blackhawks over the Edmonton Oilers, the New York Islanders defeat the Florida Panthers, and the Montreal Canadiens upset the Pittsburgh Penguins in overtime.

A Busy Day in Ottawa

Aug. 1 has been a productive day for the Ottawa Senators over the years. In 1995, they signed veteran defenseman Dan Quinn, who spent the previous season with the Los Angeles Kings. He played 13 games for the Senators during the 1993-94 season. He played in 28 games before being traded to the Philadelphia Flyers for cash consideration.

Quinn was originally drafted by the Calgary Flames with the 13th overall pick of the 1983 NHL Entry Draft. He played in 805 games, over 14 seasons, with the Flames, Pittsburgh Penguins, Vancouver Canucks, St. Louis Blues, Flyers, Minnesota North Stars, Kings, and Senators. He retired in 1996.

On Aug. 1, 2000, the Senators named Roger Neilson as an assistant coach. This came after head coaching stints with the Toronto Maple Leafs, Buffalo Sabres, Canucks, Kings, Rangers, Panthers, and Flyers.

His tenure in Philadelphia ended in 2000 when he was fired by general manager Bobby Clarke while undergoing cancer treatment. During the 2001-02 season, Senators head coach Jacques Martin temporarily stepped down so Neilson could take over for the last two games and reach 1,000 games coached in the NHL. He passed away on June 21, 2003.

On the same day Neilson was hired by the Senators, Aug. 1, 2000, the Flames named Don Hay as their new head coach, replacing Brian Sutter, who was fired at the end of the 1999-2000 season. Hay was previously an assistant in Calgary during the 1995-96 season before leaving to become the head coach of the Phoenix Coyotes.

His return to the Flames did not go so well. He was fired after just 68 games and was replaced by Greg Gilbert. Hay’s overall record as a head coach was 61-65-20-4. He did have quite a bit of success in both the American Hockey League (AHL) and Western Hockey League (WHL), where he won three President’s Cups (WHL championship) and three Memorial Cups (Canadian Hockey League championship).

On Aug. 1, 1946, Frank Selke was named the Managing Director of the Canadiens. This move came two months after Selke resigned from a similar position with the Maple Leafs due to clashing with Conn Smythe. The Canadiens won six Stanley Cup championships under the leadership of Selke, including five in a row between 1956 and 1960. He retired following the 1963-64 season.

The Panthers named Bryan Murray as their new general manager on Aug. 1, 1994. He replaced Clarke, who had resigned in June to return to the Flyers. Murray was just the second general manager in franchise history, and he held onto the job until 2000. The Panthers qualified for the postseason three times under Murray and made the Stanley Cup Final in 1997.

A total of 20 NHL players have been born on this date. Syl Apps Jr. had the most successful career out of this group. He was born on Aug. 1, 1947, and is the son of Hockey Hall of Famer Syl Apps. He ended up playing in more games and scored more points than his dad. He played in 727 games, scoring 183 goals and 606 points, over 10 seasons, with the Rangers, Penguins, and Kings.

Defenseman Anton Stralman, who turns 36 today, has played in the most games. He has suited up in 930 regular-season games and counting since being drafted by the Maple Leafs in 2005.

Frank Mailley played in the fewest games, appearing in just one for the Canadiens in 1943. Marc Denis is the winningest goaltender born on Aug. 1. He racked up 112 victories for the Colorado Avalanche, Columbus Blue Jackets, Tampa Bay Lightning, and Canadiens.

Other notable players born on this date include Dave Farrish (66), Wendell Young (59), and the late Gus Marker.