The 5 Least-Improved Teams of the 2022 NHL Offseason 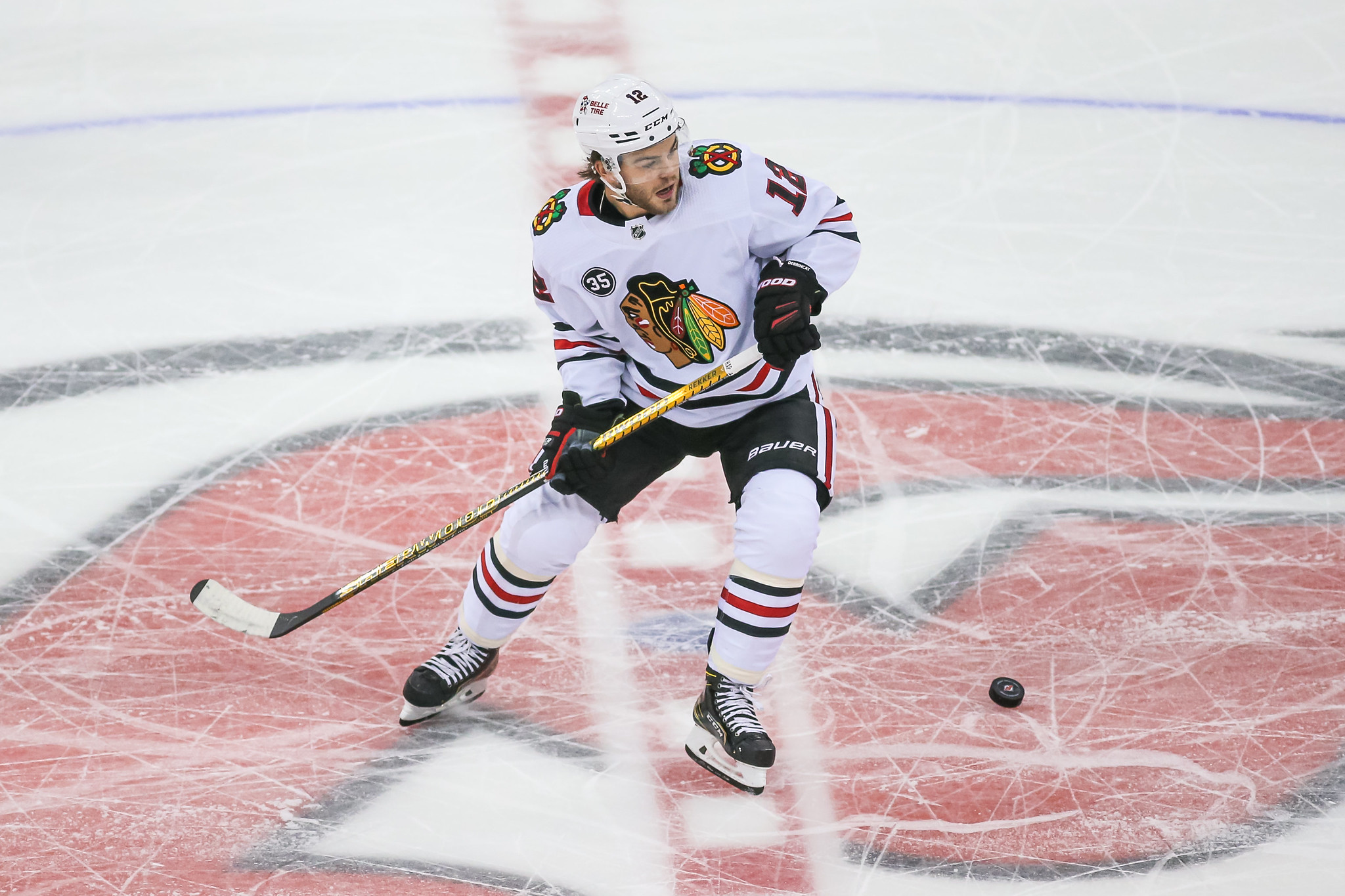 The NHL offseason is the most captivating time of the year, bringing with it a significant amount of roster turnover each summer. The 2022 iteration was no different, with a number of squads forced to shed quality players for cap relief, leaving those with ample space salivating by essentially upgrading their lineups for little to no cost. This list focuses on those organizations who waved goodbye to the most talent this summer, weakening their Stanley Cup odds in the process.

Remember, we’re more interested in the total volume of talent lost rather than where a given team stands relative to the rest of the league. For example, the Philadelphia Flyers’ offseason direction is concerning, but they didn’t lose anyone of consequence and are no better or worse for all of their roster activity and are still likely to finish near the basement next season. With that, let’s dig into the five teams which saw the greatest overall reduction in talent thus far in the 2022 offseason.

Was there ever any other choice to headline this list? Driven by general manager Kyle Davidson’s burning desire to rebuild a sinking franchise in his image, the Chicago Blackhawks have taken a hatchet to their roster this summer. Working to boost the team’s lottery odds is understandable given the quality of the NHL’s 2023 and 2024 draft classes, but the immediate short-term outlook for the NHL’s former flagship organization is demoralizingly bleak.

Related: The 5 Most-Improved Teams of the 2022 NHL Offseason

Davidson began the offseason by dealing two-time 40-goalscorer Alex DeBrincat to the Ottawa Senators for a package headlined by the seventh-overall pick and moved the third-overall pick in 2019 (Kirby Dach) to the Montreal Canadiens. He then proceeded by declining to offer several notable restricted free agents (RFAs) a qualifying offer, including Dylan Strome and Dominik Kubalik, rather than have them re-sign and potentially flip them at the deadline instead.

Consequently, all eyes have shifted onto pending unrestricted free agents (UFAs) Patrick Kane and Jonathan Toews, the two remaining figures from the 2010 Stanley Cup team, who have unsurprisingly hit the trade block. They know better than anyone that success in the NHL is often mined through the draft, but that doesn’t make their impending departures any less painful. If nothing else, the assets recouped in future trades will aid the rebuilding effort, but recollections of the shamelessly awful Buffalo Sabres and Arizona Coyotes in recent memory will leave a sour taste in the mouths of the Blackhawks faithful.

Although the Blackhawks signed several NHL-level players in free agency, the overall shedding of talent has severely hampered the roster but arms them well for the tanking war of 2023. The 2022-23 season could be one for the record books in Chicago, but not in a way that will be looked on with any fondness.

You have to hand it to the Minnesota Wild. They knew the 2022 offseason could initiate an overwhelming amount of roster turnover due to buying out Zach Parise and Ryan Suter, but they still tried to strike before the bill came due. Firmly entrenched in the second tier of Cup contenders in the Western Conference, the Wild acquired veteran netminder Marc-Andre Fleury, grinder Nicolas Deslauriers, and Tyson Jost at the trade deadline to boost their odds heading into the postseason. They stumbled against the St. Louis Blues in the second round and finished the 2021-22 season with nothing to show for their efforts but a looming cap disaster.

Seemingly lacking both the cap space and desire to pay RFA Kevin Fiala what he was worth, general manager Bill Guerin flipped the zone transition maven to the Los Angeles Kings for a first-round pick and prospect Brock Faber. Although that represents a decent haul for a player who felt increasingly alienated from the organization, the Wild’s prospects for immediate contention take a sizeable hit by losing a player who tallied 85 points in 82 games last season.

Also leaving Minnesota are veterans in Deslauriers, Cam Talbot, Jordie Benn, and Nick Bjugstad, although their impact could be replaced by fully-graduated top prospects in Marco Rossi, Matt Boldy, and Calen Addison. The Wild will be freed from the shackles of the Parise-Suter buyouts after the 2024-25 season when their collective cap hit drops to below $2 million, representing a target date for the team to re-enter legitimate Cup contention. Now, it’s possible that their young stars make a rapid adjustment to full-time NHL life and provide tremendous value on entry-level contracts (ELCs), but historical precedent suggests they will need some time to fully acclimate.

The Wild’s already top-tier prospect pool gained two notable additions in the 2022 Draft with the selections of forwards Liam Ohgren and Danila Yurov, pointing to a bright future in the “Land of 10,000 Lakes.” Even so, there is little debate the team is poised to take a step back next season, even if Guerin should be commended for his maneuvering in an untenable situation.

As the Blackhawks discovered in the aftermath of their quasi-dynasty forged in the early-2010s, the ruthless machinations of the salary cap don’t discriminate between the haves and the have-nots. The Tampa Bay Lightning, owners of three consecutive Stanley Cup Final appearances, finally felt the wrath of a stagnant salary cap, losing key supporting pieces in Ondrej Palat and Ryan McDonagh this offseason.

The development of defenseman Mikhail Sergachev helps ease the pain of trading the 33-year-old McDonagh, but watching a playoff hero in Palat depart in free agency takes a chunk out of the Lightning’s strong depth contingent. Not only has the two-way demon delivered in countless high-stakes moments throughout the three-year romp, his 52 points in 71 playoff games since 2020 rank seventh over that span. Although the Lightning’s recent spate of contract extensions locks in several key figures for the foreseeable future, there is little on the roster that resembles what the versatile Palat brings to a championship group.

With the trio of Ian Cole, Haydn Fleury, and Philippe Myers, the hope is that the Lightning can plug one or more beside their monstrous left-sided contingent and see similar results to years past. The returning Vladislav Namestnikov is a sort of Palat-lite, but as anyone can attest, the sequel is never as good as the original. These are gambles necessitated by the cap, but it’s hard to argue against the notion that the organization has taken a step back.

Because several of the Atlantic Division bottom-feeders made significant strides this offseason, the Lightning won’t find the regular season to be as much of a cakewalk as in recent seasons. Given that most of Tampa Bay’s core pieces remain under contract, their days of contending for a championship are far from over. However, a future in which they are finally knocked off their perch for good is creeping up on the horizon.

For all of the dexterity and grace with which the Vegas Golden Knights have tap-danced around the cap since their inception, their callous approach to roster-building finally caught up with them this summer. Despite acquiring Shea Weber’s contract for the purpose of placing him on long-term injured reserve (LTIR), the Golden Knights remain over the cap, with Nicolas Hague, Nicolas Roy, and Keegan Kolesar still needing new contracts for next season. Feeling the squeeze, the 2018 Stanley Cup Finalists sent Max Pacioretty and Dylan Coghlan to the Carolina Hurricanes for future considerations, essentially a pure cap dump brought upon by their haphazard handling of the cap.

Despite shedding top talent for nothing in return, the Golden Knights remain a force in the Western Conference. They narrowly missed out on a playoff spot last season despite accruing the second-highest total cap hit of injured players (CHIP), a season-long tally of the per-game cap charge of any players missing due to injury or illness. Notably, Alec Martinez (56 missed games), Mark Stone (45), Pacioretty (43), Reilly Smith (26), and William Karlsson (15) were absent for significant stretches. That’s without mentioning that newly-acquired Jack Eichel didn’t make his season debut until Feb. 16, despite being acquired from the Buffalo Sabres in November.

Most of the Western Conference’s top dogs either stood pat or saw some notable pieces leave this offseason, making the Golden Knights’ offseason less dire within the wider NHL context. Still, it’s never a good sign if one of the league’s top goalscorers gets dealt for dust and several other players remain unsigned, and the team is already more than $1 million over the cap. Vegas’ injured stars could easily revert to their pre-2022 form and bring the team back to competitive relevance, but no one makes causes more cap-induced headaches for themselves than the Golden Knights.

The Calgary Flames’ offseason got off to a turbulent start with offensive superstar Johnny Gaudreau making a family-oriented decision to join the Columbus Blue Jackets and his running-mate Matthew Tkachuk subsequently requesting a trade. After a superb regular season in which the team made a 31-point improvement over their 80-point pace from the 2020-21 season with Darryl Sutter returning to the helm, their Stanley Cup window seemed to have abruptly shut.

Fortunately, the immense haul garnered by the Flames in the eventual Tkachuk trade with the Florida Panthers salvaged their offseason, even if it only temporarily stemmed the bleeding. Both Jonathan Huberdeau and MacKenzie Weegar are UFAs after next season, setting them up to re-enact the contractual song and dance once again next summer.

Even after recouping the services of Huberdeau and Weegar, the Flames are down one elite winger heading into 2022-23. The Panthers’ Hart Trophy candidate can reprise Gaudreau’s role as a playmaking winger, but they now lack a player in the mold of Tkachuk, seemingly the 2020s version of super-pest Brad Marchand. Gritty depth pieces in Erik Gudbranson and Calle Jarnkrok also packed their bags, re-shaping the team’s identity in a single offseason.

The uncertainty of the 2023 offseason aside, the Flames are well set up to challenge for the Western Conference title in 2022-23, given that their closest competitors — including the Colorado Avalanche — either got worse or stood pat. How they fare and proceed beyond next spring is anyone’s guess and could have huge ramifications for the franchise’s long-term outlook. For what it’s worth, both Huberdeau and Weegar showed interest in re-signing, but a lot can change in a year’s time.

Where Do These Teams Go From Here?

Most of the teams that relinquished talent were powerless under the stranglehold of a relatively stagnant salary cap and needed to shed money to fit under the ceiling. It’s why you see so many loaded teams on this list in the Lightning and Golden Knights. In a perfect world, the cap doesn’t exist, and organizations have the freedom to keep everyone under contract. Unfortunately, the NHL has yet to follow their brethren in the NBA in implementing a luxury tax, so riding a frenzied cap carousel is the reality for the foreseeable future.

Several of the teams on this list are heading in opposite directions on the competitive timeline, and the 2022-23 season promises to be another campaign filled with intriguing roster decisions and evasive cap-related schemes.

Marko is an aspiring sportswriter with a passion for crafting stories while using a combination of the eye-test and (shudder) analytics, which is complemented by an academic background in criminology and political science.

When not covering the Colorado Avalanche and Pittsburgh Penguins for The Hockey Writers, he can also be found pouring countless hours into various sports video games franchises, indulging in science fiction novels, and taking long runs around his neighbourhood.

Marko can be reached through his personal blog at unexpectedgoals.ca, and you can yell at him by following him on Twitter and other social media seen under articles like this one.