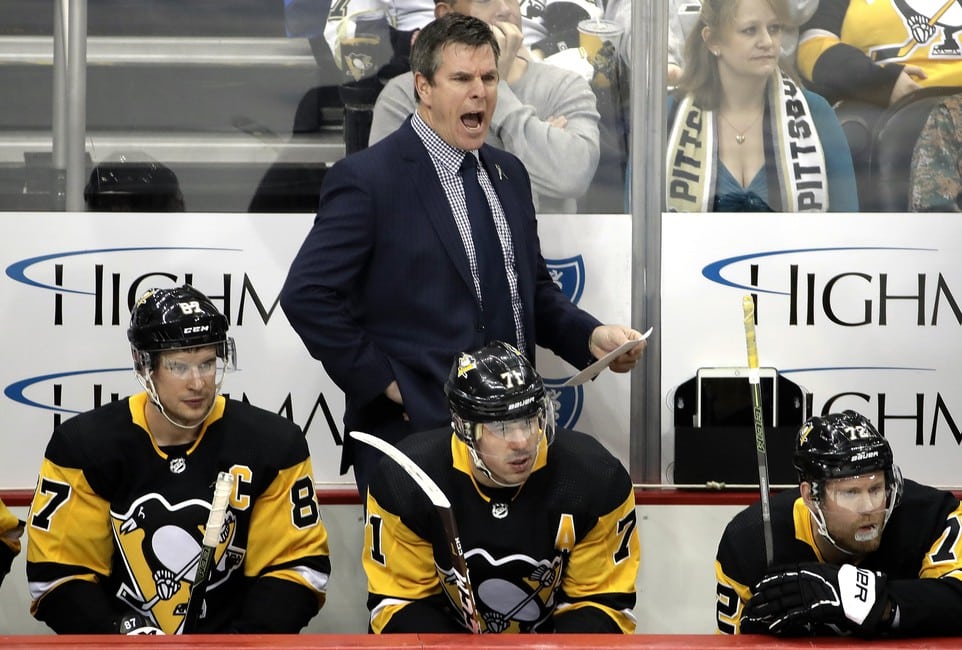 NHL teams change head coaches more frequently and with more success than in any other professional sport. The strategy of a coaching change reached extreme levels when 12 of the (then) 31 teams in the NHL changed coaches between April 2018 and February 2019. It led to great success in 2019-20 and 2020-21 when Rick Bowness of the Dallas Stars and Dominique Ducharme of the Montreal Canadiens took over midseason and turned their respective teams into Stanley Cup runner-ups.

Things were different during the Original Six era of the NHL, and they were even more drastically different before the league cut down to six. The 1931-32 Toronto Maple Leafs fired head coach Art Duncan after just five games. His replacement Dick Irvin led the team back into playoff position in a 48-game regular season. Toronto beat the Chicago Black Hawks and the Montreal Maroons in two-game, total-goal series to reach the Stanley Cup Final. The Maple Leafs defeated the New York Rangers in a five-game series to claim Lord Stanley, and Irvin went on to win two more Cups with the Canadiens later in his coaching career.

Claude Ruel took over for Toe Blake as head coach of the Montreal Canadiens in 1968. He kept the Habs dynasty of the 1960s going with a Stanley Cup in his first year, but missing the 1970 Playoffs turned up the pressure. He resigned after a slow start to the 1970-71 season, and Montreal replaced him with Al MacNeil.

Related: Canadiens Get Everything They Need in Head Coach Martin St. Louis

MacNeil made a surprising call to sit Rogie Vachon during the 1971 Playoffs in favor of 23-year-old goaltender Ken Dryden. Benching a goalie with a Vezina Trophy and two Stanley Cups to his credit took guts, and Dryden made it worth his while by leading the Canadiens to yet another Stanley Cup. Lightning in a bottle didn’t last for MacNeil. He didn’t return for the 1971-72 season because of a bad relationship with Henri Richard.

The unconventional wisdom of general manager (GM) Lou Lamoriello sparked the most extreme demonstration of chaotic coaching changes in the history of the NHL. The New Jersey Devils occupied the top spot in the Eastern Conference with just eight games to go in the 1999-2000 season. The wily GM fired Robbie Ftorek because of a skid that included just five wins in 17 tries and named Hall of Fame defenseman Larry Robinson his replacement with little time to spare before the playoffs began.

The Devils responded well to the shocking development. They easily disposed of the Florida Panthers and the Maple Leafs in the first two rounds of the playoffs to advance to a showdown against the Philadelphia Flyers in the Eastern Conference Final. Even after Philadelphia took a 3-1 advantage, a stifling neutral zone trap and the fantastic work of goaltender Martin Brodeur helped New Jersey back to the Stanley Cup. They defeated the Dallas Stars in six games.

The highly unusual sequence of events didn’t end there. Robinson coached the Devils to Game 7 of the Stanley Cup Final the following year, but it still wasn’t enough to convince Lamoriello to keep him through the 2001-02 season. Robinson and Ken Hitchcock, his opponent in the 2000 Stanley Cup, both lost their jobs within three days of each other in January 2002. Lamoriello acknowledged that the shortcomings of the players forced the change, indicating a big-picture understanding of the nature of NHL head coaches rather than an impulsive, short-sighted temperament.

The shuffle wasn’t enough to keep Robinson out of the mix in the future, though. He stepped back behind the New Jersey bench in 2005 for a short-term stint when Pat Burns experienced health concerns.

The Pittsburgh Penguins hit their stride in a new era with an Eastern Conference championship in 2008. The future still looked bright after a loss to the Detroit Red Wings in the Stanley Cup Final, even when Marian Hossa jumped ship to the adversary. The 2008-09 season started poorly, however. GM Ray Shero showed little hesitation to pull the plug on head coach Michel Therrien with his team in 10th place in the Eastern Conference on Feb. 15, 2009.

Dan Bylsma took over an overwhelmingly talented roster with 21-year-old Sidney Crosby, 22-year-old Evgeni Malkin, 21-year-old Kris Letang, and 24-year-old Marc-Andre Fleury. The previously unknown coach of the Wilkes-Barre/Scranton Penguins of the American Hockey League (AHL) capitalized on the golden opportunity. The Penguins stormed back to earn the fourth seed in the East and advanced for a rematch against Hossa and the Red Wings. With a loaded roster of offensive firepower, gritter Maxime Talbot surprisingly stole the show with a pair of goals in the decisive 2-1 win in Game 7. Bylsma spoke ironically during the Stanley Cup celebration.

“It sounds surreal. I don’t know if anyone could’ve made up a story like that, me going from an assistant coach in the American League all the way to here (Stanley Cup champion head coach) inside of a year.”

The Los Angeles Kings let go of Terry Murray after a 13-12-4 start and a brutal scoring drought to begin the 2011-12 season. Darryl Sutter replaced interim head coach John Stevens days later. The Kings finished 29th out of 30 teams in goals per game, but they snuck into the postseason as the eighth seed in the Western Conference.

Sutter kickstarted the Kings’ run to their first Stanley Cup in their 45-year franchise history. They whipped through the West with just two losses in three series against the conference’s top three seeds. They generated better offense during the playoffs and raised their scoring drastically above their total in the regular season. The veteran bench boss helped the Kings past the Devils in six games to become the first eighth seed ever to win the Stanley Cup. He won his second just two years later.

Bylsma mismanaged the most talented team in the NHL after the honeymoon ended in 2009. His players repeatedly lost their concentration during intense playoff series, and the Penguins made the switch to Mike Johnston after an exit in the second round of the 2014 Playoffs. The results were underwhelming in less than one and a half seasons.

Expectations rose when Shero added Phil Kessel to an already stacked group of forwards entering 2015-16. Pittsburgh once again fired the head coach after a slow start and turned it over to the coach of their AHL affiliate. The move to hire Mike Sullivan acknowledged the “growing divide that seemed to exist between the nice guy and the players that might have needed someone to kick them in the backside.”

Sullivan instilled the necessary discipline into a group long overdue to showcase their world-class talent. He made a gutsy call to go with rookie Matt Murray in between the pipes after Fleury’s instability had caused chaos in recent playoff disappointments. Crosby and Malkin reached their career peaks with Stanley Cups in 2016 and 2017. Sullivan remains one of the best coaches in the NHL.

Analysts picked the St. Louis Blues to contend for the Stanley Cup entering the 2018-19 season, but a slow start led to the dismissal of Mike Yeo on Nov. 20, 2018. Expected top goaltender Jake Allen struggled, and interim coach Craig Berube took a leap of faith that led to one of the unlikeliest outcomes in NHL history.

The Blues sat in last place in the NHL on Jan. 2, 2019. However, Jordan Binnington shut out the Philadelphia Flyers four days later in his third career start, and Berube decided to ride the rookie’s hot hand. Binnington stole the crease with 13 victories in his next 15 starts. He finished the regular season 24-5-1 with a .927 save percentage (SV%) and 1.89 goals against average (GAA) and earned credit for each of his team’s 16 playoff victories. The magical ride helped the Blues become the only team in the expansion era to win the Stanley Cup after occupying the bottom spot in the league after their 20th game of the season.

The Effect of an NHL Head Coach

How could NHL teams in such unstable situations that require midseason coaching changes make up for five of the first 20 Stanley Cups in the new millennium? Martin St. Louis shed some light after his midseason start with the Montreal Canadiens in 2021-22.

The nature of the NHL has more to do with the success of recent Stanley Cup winners than the replacement coaches do. All seven coached their respective teams fantastically considering the results. However, the trend speaks to the importance of the metaphorical reset button that St. Louis mentioned more than the coaching systems. The incredible goaltending variable, the ultimate wild card of the sport of hockey, also factors in heavily. This reality will continue to cost NHL head coaches their jobs, whether deserved or undeserved, if their teams struggle out of the gates in future seasons.

Colin Newby is a freelance journalist from Delaware County, PA covering the Philadelphia Flyers for The Hockey Writers. He is an encyclopedia of useless sports knowledge with an uncanny ability to rattle off Flyers goaltending stats from 2004 and every Stanley Cup winner during his lifetime. The depths of his knowledge stem from spending his entire life following the Flyers and the NHL, from fan favorites like the “Legion of Doom” and Claude Giroux to forgotten journeymen like Andy Delmore and Branko Radivojevič. He joined the Professional Hockey Writers’ Association (PHWA) in 2022.

Colin also covers the Philadelphia Eagles and works for 97.5 The Fanatic in Philadelphia.