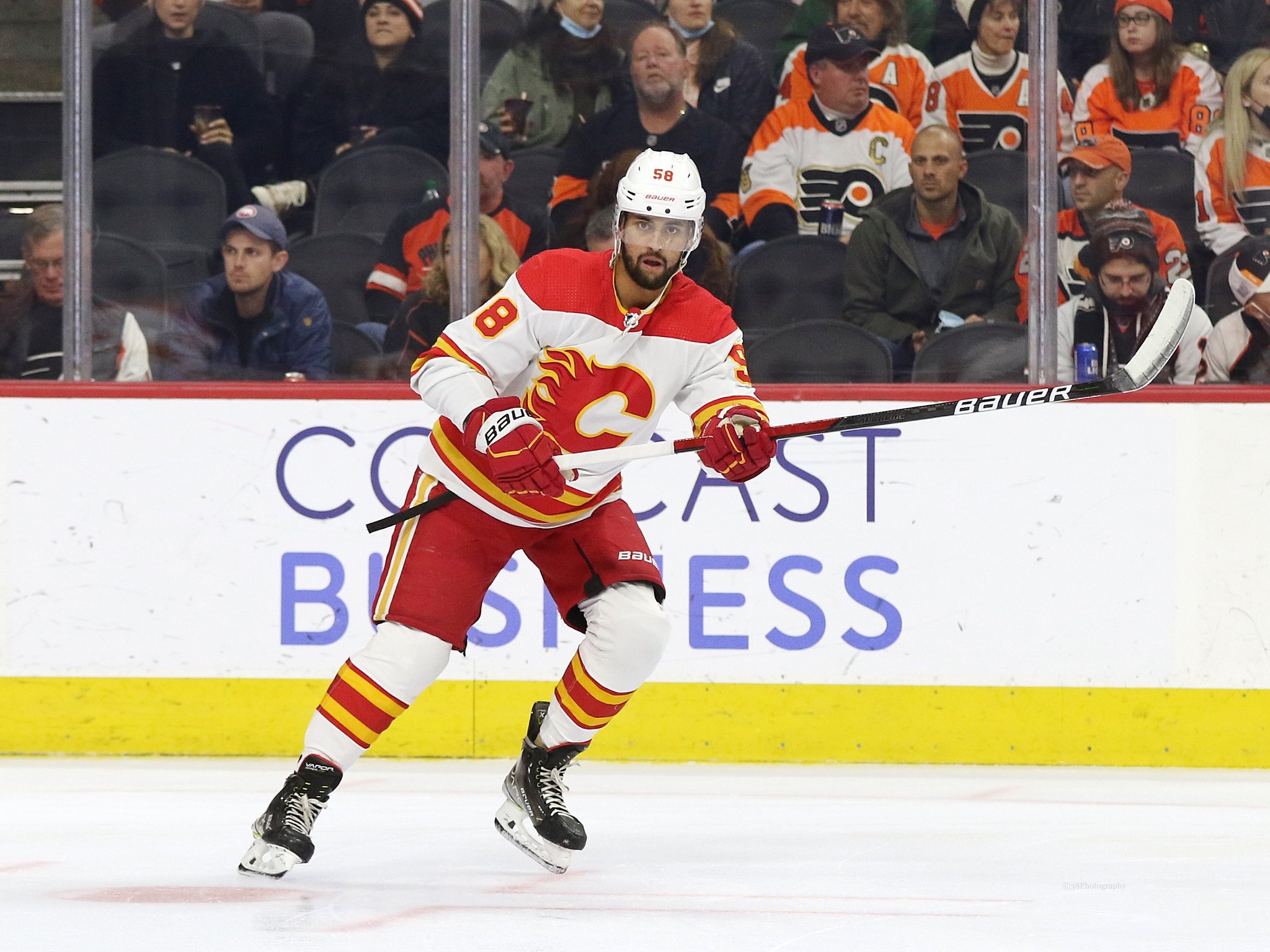 The Calgary Flames may have pulled off the trade of the summer and salvaged what hope they had in acquiring two big pieces in return for Matthew Tkachuk. But now MacKenzie Weegar, one of the pieces, fits right into a very crowded blue line that doesn’t have room for everyone.

The Flames defensive pairings at the end of last season looked like this:

Add Weegar, Juuso Valimaki, Connor Mackey, and possibly another name or two while only subtracting Erik Gudbranson, and there’s a logjam, but not necessarily a bad problem to have.

As a fan, it may be difficult to part with some players, but someone has to get dealt. However, it is always good to have an abundance of talent so that it can be used to upgrade somewhere else or bolster the look for the future. Let’s look at who could be traded, what the pairings could look like after a trade, and where a defenceman could be headed.

Which Flames’ Defenceman Could Be Traded?

Of all the Flames’ defencemen, I would list two as players the team won’t consider moving. Those would be Noah Hanifin and Rasmus Andersson. Both played very well as the top pairing last season for Calgary and as the team’s top options, each have a cap hit south of $5 million, as Hanifin is on the books for two more seasons while Andersson is signed for four.

There is only a small chance Weegar is dealt before next season since he is considering signing long-term and the Flames just traded for him. The trade deadline may be a different story if things aren’t going according to plan, however. But for now, he should fit in on the second pairing.

Weegar’s likely partner is Chris Tanev who played on the Flames’ second pairing last season and is a rock-solid defender. He has a 10-team no-trade clause and makes a fair amount of money for his services. He is also a veteran presence the team needs on the backend.

Now to get down to the interesting and difficult part. We have established the top-four and where each player will likely be playing at five-on-five, but the bottom pairing and seventh defensive spot will have some competition. But before the Flames even see what they can all do, they will need to cut it down to add someone at forward first.

Nikita Zadorov just signed a new contract on July 13 and is the big, physical presence the Flames need at even strength and on the penalty kill. Fortunately, he is capable of playing both sides of the ice, so the team isn’t restricted to who they can trade and play alongside him on the third pairing.

Valimaki was expected to be part of the Flames’ defence last season but was knocked out of the top-six and ended up playing most of the season in the American Hockey League (AHL). Next season he is waiver eligible, so the Flames can’t do what they did last season and send him down during the season without a very high risk of losing him. Another young defenceman that will be vying for a spot on the team is Connor Mackey. He too is waiver eligible and after developing him for two seasons and seeing his vast improvements, the Flames won’t want to lose him.

That leaves unsigned restricted free agent Oliver Kylington who is the most likely candidate to move due to his status and other young players who are coming in and already signed. He will be able to provide a strong return considering the numbers he put up last season and the role he played in the Flames’ success. But moving just him may not be enough, as I count eight defencemen that should have a role in the top-six of the Flames next season and any of their talent/cap would be wasted in a role as the seventh defenceman.

One defenceman will be gone, but they could also risk another year of overdevelopment in the AHL by Valimaki or Mackey and send them down before waivers come into effect. That would bring the count down to six in a top-six role with Nicolas Meloche or Dennis Gilbert earning the role of the seventh defenceman. Another issue the Flames could run into with that is if one or two defenders get injured and they need to call up Valimaki or Mackey. They would be in a tight spot and get less of a return in a trade since other general managers would see their situation as desperate.

We’re going to focus more on Kylington here for potential trade partners since he is the most likely of the group who will be dealt, as he can play both sides of the ice which opens up more potential suitors.

The Dallas Stars lost John Klingberg and didn’t replace him. Sure they signed Colin Miller, but they need an actual top-four defenceman if they are to keep up with the teams in the Western Conference. The Washington Capitals look fairly weak on the backend, and they too are planning on competing. With John Carlson as the only signed defenceman after this season, they could have a younger impactful piece added to the mix with team control. The Florida Panthers lost Weegar and will hurt because of it. While Kylington or one of the younger defencemen the Flames have won’t fully replace what he brought, it could be an improvement on the very little they have at the moment.

The Flames could either be looking for a forward in return to help with their shallow depth in the bottom-six or a future asset like a younger prospect or pick. Either way it helps them out to not risk losing someone for nothing.

We’ve established what the top-four should be for the Flames unless in some way they think it’s better to move on from an older defenceman like Tanev. So the defensive pairings could look something like this if Kylington is in fact the one traded.

It is still a very strong defence and one that can compete up and down with the best in the league. They may not have a true number one like a number of teams, but the competition and how they play with Darryl Sutter as the coach will be dangerous. The Flames may not be as good as they were last season due to the issues at forward, but things could be cleared up a bit before the season with the cap space available and a trade bound to happen involving one of their defencemen.

Rob Couch is a THW freelance writer covering mainly the Edmonton Oilers and Philadelphia Flyers. He covers everything you need to know about fantasy hockey. He will also keep you up to date with NHL Stats News, trade talks, and daily betting guides.

You can find more of his work here.