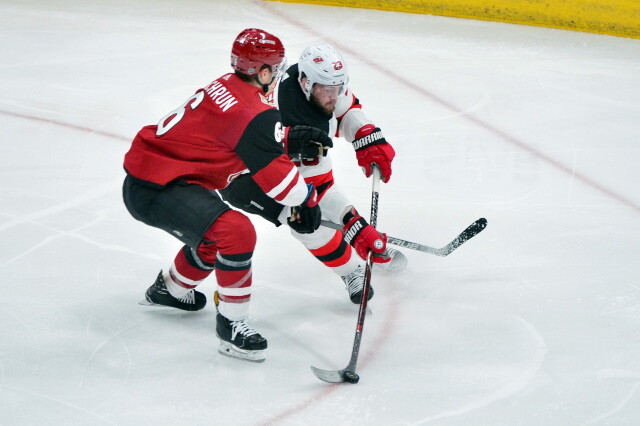 Rick Dhaliwal: Vancouver Canucks president Jim Rutherford on potential trades: “We are open to discuss things, we will know more as we get closer to draft day.”

All is quiet on the Jesper Bratt front

Ryan Novozinsky: Talked to the agent for New Jersey Devils pending RFA forward Jesper Bratt on Friday and he didn’t have an update on negotiations.

These things can take time, something the Devils said a few weeks ago.

On the Coyotes first-round picks, and defensman Jakob Chychrun

Craig Morgan of Go Phnx: The Arizona Coyotes have seven picks in the top 45. The Coyotes have lots of holes and any draft picks this year are years away.

An executive on the speculation that the Canadiens could trade the No. 1 pick and the Devils the No. 2 pick.

“You ain’t trading the No. 1 pick when you’re hosting the draft and New Jersey ain’t trading No. 2 either,” the executive said. “It’s all just chatter.”

“I think both,” he said. “We’re gonna look at every scenario when we get in there. We’re gonna go through them all. We’re thrilled to be where we are. We’ve taken the pain and now it’s time to go make some hay and let’s see what we can get done.”

Coyotes defenseman Jakob Chychrun hasn’t asked for a trade. When asked if the Coyotes didn’t trade him at the draft, Chychrun said:

“I don’t know. I’m signed for three more years so we’ll see. The trajectory of where the team is going and a lot of that stuff is important to me … That’s really the biggest thing for me is just having that competitive drive in me; a burning desire to win a Stanley Cup.”

Armstrong said on Friday that they are always listening to offers, but not much has changed with regards to Chychrun.