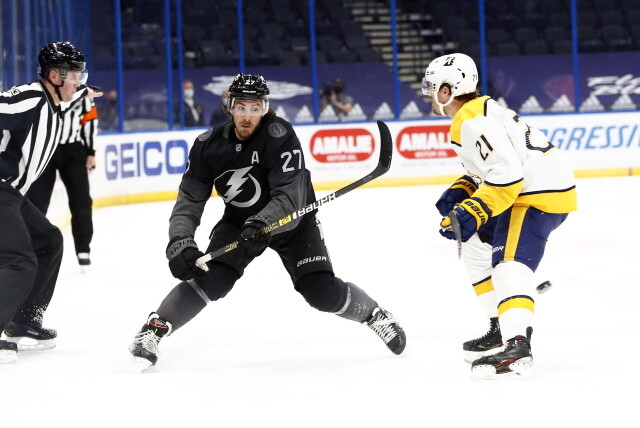 Joe Smith: “Had to be a tough move for #tblightning to deal Ryan McDonagh, a ‘warrior’ and key part of leadership group. They don’t win those two Cups without him on shutdown pair. The move does free up $6.75 million of cap space that can help with other needs, but still big shoes to fill”

Tampa Bay Lightning: “For your grit. For your passion. For your leadership on and off the ice. Thank you for everything, Mac.”

David Pagnotta: Predators GM David Poile: “Ryan is the ultimate team player who will bring experience and leadership to our lineup. . . we couldn’t be more thrilled that he waived his (NMC) to come to Nashville. With the ability to play in any situation, he immediately strengthens our defensive corps.”

Greg Wyshynski: The Lightning may not be looking to buy out Myers.

GM Brisbois: “We’ve liked him going back to his junior days. We really like the tool box.”

Brisebois on Myers skating: “In the past, we’ve been able to work with players and make them better skaters.”

Adam Kimelman: “Hope things work better for Phil Myers in Tampa than they did in Nashville. Maybe learning from Victor Hedman can unlock the consistency in his game. Because Myers has pretty much everything else skill-wise.”

Cap Friendly: “Ryan McDonagh has a full No Trade clause as part of his contract, and therefore would have had to agree to and sign-off on this deal to the #Preds . But despite the trade, his clause will follow him to Nashville and remain intact for the duration of his contract.”

Ryan McDonagh has been excellent defensively for Tampa Bay, but at age 33 the remaining four years of his deal are looking incredibly dicey. The Lightning get out of this deal just in time. pic.twitter.com/hHftC66WvI

Ryan McDonagh has been traded from the Tampa Bay Lightning to the Nashville Predators in exchange for Grant Mismash and Philippe Myers. No salary retention. Good trade for both teams in our eyes when the Lightning needed to clear some space. pic.twitter.com/jOPHT7B8OO

Ryan McDonagh (traded to Nashville) is a second/third pair defender with some 5v5 defensive strength but not helpful penalty killing. pic.twitter.com/ZC2muEXpsy

Philippe Myers, traded to TB, is a depth defenceman who will almost certainly be bought out in the next few days. #GoBolts pic.twitter.com/9CkRkjK11y