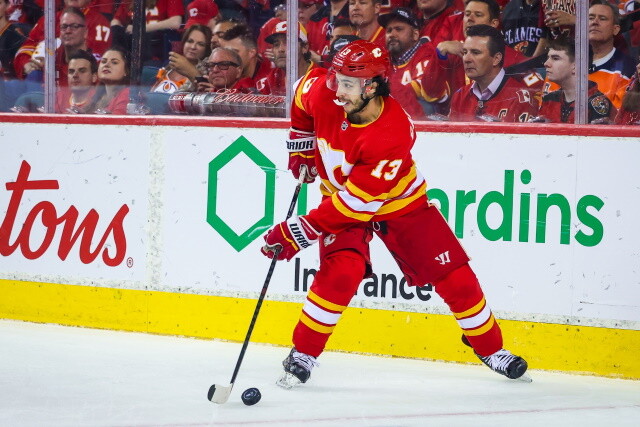 There are a lot of teams waiting to see if they are able to get a deal done or not, so they could potentially pounce on him once the free agent market opens July 13th.

But this is a very electric type of goal scorer. He’s been doing it in Nashville consistently and they certainly want to keep him there. He wants to stay. They’ve been saying all the right things but it basically comes down to money. So if they can figure out the dollars and structure of that contract, Filip Forsberg will stay. If they don’t, he’ll be open to the highest bidder.”

“Just an outstanding season for him. Him and Matthew Tkachuk, two guys on that team with over a 100 points for the Calgary Flames. But this is another player that everybody is kind of watching and waiting to see what happens here.

It’s a little bit different (than Forsberg-Predators). Now they are discussing a contract. Trying to see if they can keep, and how they can keep Johnny Gaudreau in Calgary. Brad Treliving, their GM saying they’ll do whatever they can to make that happen. But the other teams are also waiting to see what’s happening there.

They anticipate, a lot of people do, that Johnny Gaudreau is going to test the market and at the very least, see what the offers are out there. It doesn’t mean he’s going to leave Calgary but there is some belief he’ll test the market.

We’ll find out what happens to both of these players in the next few weeks.”

When asked if he thinks either Forsberg or Gaudreau will be playing for another team next season.

We didn’t hear that much from Johnny Gaudreau. We heard that they didn’t want to discuss contracts. That leads me to believe that at least he’s open to the possibility of seeing what his options are. Could we see him in a different Upper Deck card next season? I wouldn’t be shocked.