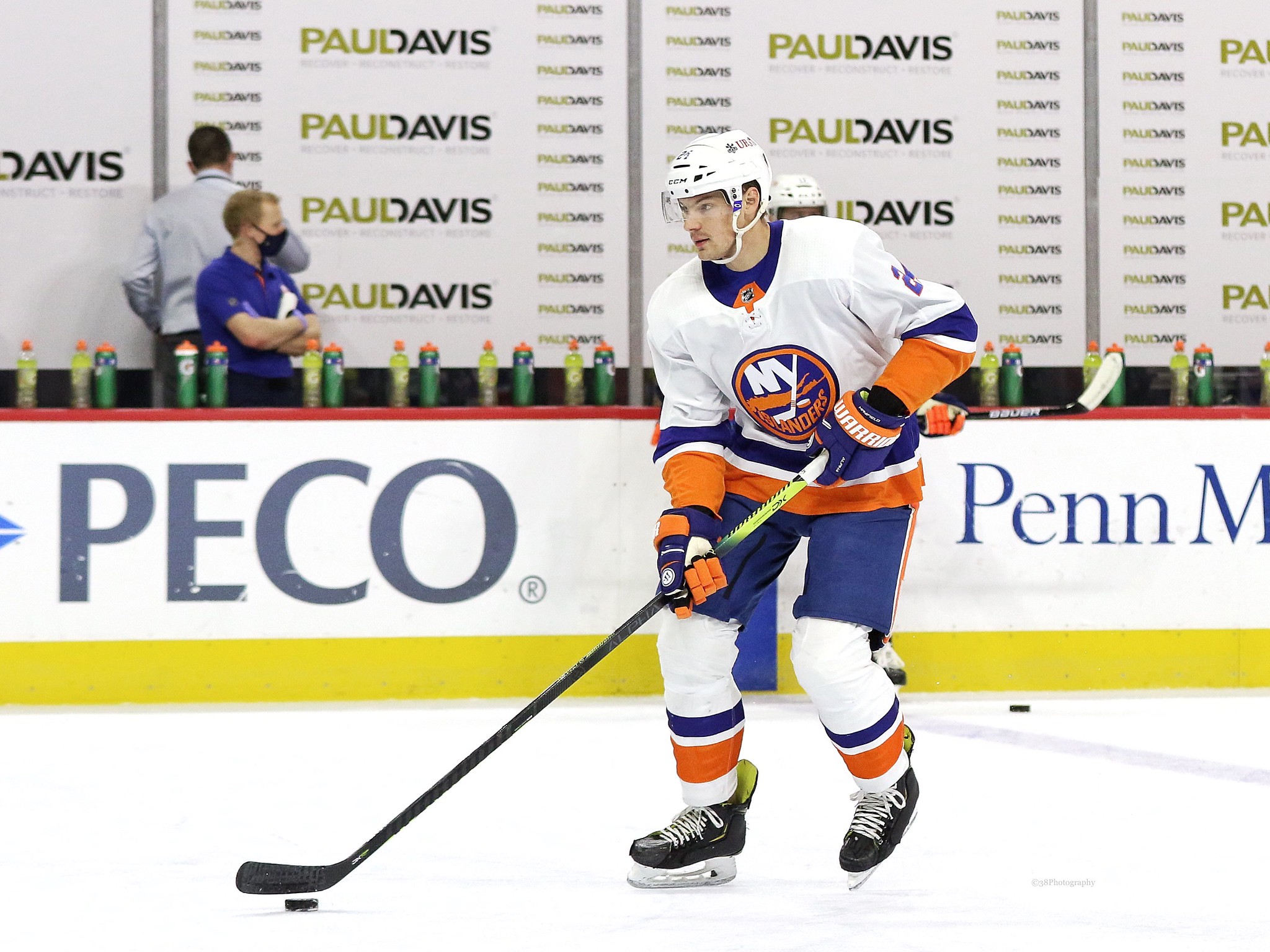 The New York Islanders are looking to make a splash this offseason, as well as a handful of big moves to rebound after a rough 2021-22 season. One of the moves general manager (GM) Lou Lamoriello is looking to make is a hockey trade, possibly trading one of the starters on the current team for another player to help out a specific need.

Scott Mayfield is the ideal defenseman for Lamoriello to move in the offseason, especially in a one-for-one type of trade. Many teams will look to upgrade their defense with a proven veteran and as a result, could be interested in acquiring Mayfield.

Mayfield has been a reliable right-side defenseman for the past eight seasons with the Islanders. Even in a season that was cut short with a lower-body injury, he contributed 2.8 defensive point shares and 109 blocked shots as a reliable second-pairing defenseman. The Islanders ideally would keep Mayfield on the roster but playing on the final year of a five-year contract, the team could look to move him this offseason.

The ideal trade destination would be the St. Louis Blues. Mayfield grew up in the city, and would be making his return home to a team he could likely finish his career with. With the Islanders looking to add a top-six forward, and the Blues possessing a handful of skaters — including Vladimir Tarasenko, who the team was linked to trading last offseason — the two teams could easily make a trade involving the veteran defenseman.

The question for the Blues would be where Mayfield fits in the defense and if he puts the unit over the top. The Blues already have Justin Faulk and Colton Parayko on the right side of their defense and last season had two great pairings that propelled them to the third-best record in the Central Division. However, the team struggled in the playoffs when some of the defensemen were out with injuries and the unit fell apart against the Colorado Avalanche in the second round, causing the team to lose the series in six games. Mayfield would not only add depth to the unit, but also possibly become a great second pairing to play alongside Marco Scandella, potentially giving the team one of the best defenses in the league.

The Vegas Golden Knights are already making moves to open up salary cap space, trading Evgenii Dadonov to the Montreal Canadiens for Shea Weber, who will be placed on injured reserve. The Golden Knights will continue to try to open up cap space, but at the same time the team is going all-in in the upcoming season. They hope to win the Stanley Cup after acquiring star players like Mark Stone and Jack Eichel in recent seasons and the front office will make the moves needed to do so.

The Golden Knights have a great defense when healthy but the addition of Mayfield could oddly enough, provide much-needed youth to an aging defense. The defense is led by Alec Martinez, Alex Pietrangelo, and Brayden McNabb, all of whom are 30 years old or older. The 29-year-old defensemen would not only add to the defensive end of the ice, but help prevent opponents from gashing the Golden Knights on the rush. The Islanders could trade Mayfield for a forward like Max Pacioretty, who is earning $7 million next season, making the deal a likely win-win possibility.

The Minnesota Wild enter the offseason with a difficult salary cap situation. While the talent on the roster is unquestioned, there’s little room for the front office to improve the roster, and as a result, the team could look to make a trade involving a player on their current roster. The Wild went 53-22-7 and finished the regular season with the second-best record in the Central Division, but the defense struggled, allowing 3.04 goals per game and five goals in each of its final three games of the first round exit to the Blues. As a result, Mayfield could be the perfect addition to a team looking to win the Stanley Cup.

The Islanders would love to acquire Kevin Fiala, a star forward who is a restricted free agent, in exchange for Mayfield. However, considering the salary cap situation the Wild face, they wouldn’t take on a contract in a trade rather, they would prefer to acquire prospects or draft picks. Furthermore, with Mathew Dumba and Jared Spurgeon already playing the right side of the defense, the Wild might look to address the defensive issues elsewhere. However, Mayfield would round out the defense and provide stability to the second or third pairing. Considering the impact he could have on the unit, the Wild, who already looks like a Stanley Cup contending one, will look like one of the best teams in the league.

For the first time in the Connor McDavid era, the Edmonton Oilers put together a Cup contender, reaching the Western Conference Final. The team had a great season, fueled by one of the best offenses in the league. The defense struggled, allowing 3.06 goals per game, and ultimately was their downfall against the Avalanche as they allowed 22 goals in a four-game sweep. The primary issue for the Oilers to address is their goaltending with Mikko Koskinen already departing to Switzerland and Mike Smith unlikely to return next season as well. However, the team will still look to add to the defense, a unit that notably allowed the Avalanche to find open shots at will in the short series.

The Oilers already have key contributors to the defensive unit including Darnell Nurse, Duncan Keith, and Evan Bouchard. There are questions on the right side of the unit, and if Tyson Barrie is even the best option as a second pairing. Mayfield would significantly upgrade the unit as a pure defensive defenseman and as a result, leave the team with fewer weaknesses.

The question for the Islanders is who they would acquire in exchange for a defenseman like Mayfield, considering the Oilers’ top-heavy forward unit. Jesse Puljujarvi and Kailer Yamamoto are both restricted free agents that could be acquired, but the Islanders would likely look for more players in a move considering the Mayfield’s production as a defenseman. Ultimately, the Oilers would benefit immensely from acquiring him but would have to pay a considerable price or part of a blockbuster trade.

At first glance, the Pittsburgh Penguins seem like the team that the Islanders would avoid making a deal in the offseason. After all, both teams are in the Metropolitan Division and are competing against one another every season. However, the Islanders can not only help out their divisional rival by sending Mayfield there in the offseason but possibly make a deal that upgrades their current roster. The Penguins enter the offseason with a handful of significant players entering free agency including Evgeni Malkin, Evan Rodrigues, and Kris Letang and as a result, could make considerable changes to the roster.

With all the contracts the Penguins will have to deal with, Letang, who the team hopes to secure a long-term deal with, may leave the team in free agency, leaving a great void on the right side of the defense. Mayfield wouldn’t provide the same spark from the point that Letang does. But, he would allow the team to maintain one of the best defenses in the league, a unit that allowed only 2.71 goals per game this season. The Islanders wouldn’t be able to acquire one of the top-line forwards on the Penguins like Sidney Crosby, Bryan Rust, or Jake Guentzel. However, they would likely add a middle-six forward to strengthen an offense that struggled throughout the season.

Other Possible Destinations for Mayfield

The Islanders could make a one-for-one deal involving Mayfield, however, Lamoriello will also likely look to make a blockbuster type of trade to acquire a star player. As a result, Mayfield could be part of a deal with the Chicago Blackhawks to possibly acquire Patrick Kane or Alex DeBrincat. Likewise, the Islanders could trade the veteran defenseman to the Seattle Kraken to acquire Jordan Eberle, a forward the team missed this season in their offense.

The Islanders will likely keep Mayfield on their roster for next season, especially if the team is looking to bounce back and compete for the Stanley Cup. However, the Islanders have options to move the veteran defenseman as part of a consequential offseason.

Mike Fink joined The Hockey Writers in November 2020 and covers the New York Islanders. In addition to covering the Islanders, Fink writes about the NHL at large and contributes as a weekly guest to The Hockey Writers Podcast. Follow Mike on Twitter @Finks_thoughts for more Islanders and general hockey insights.