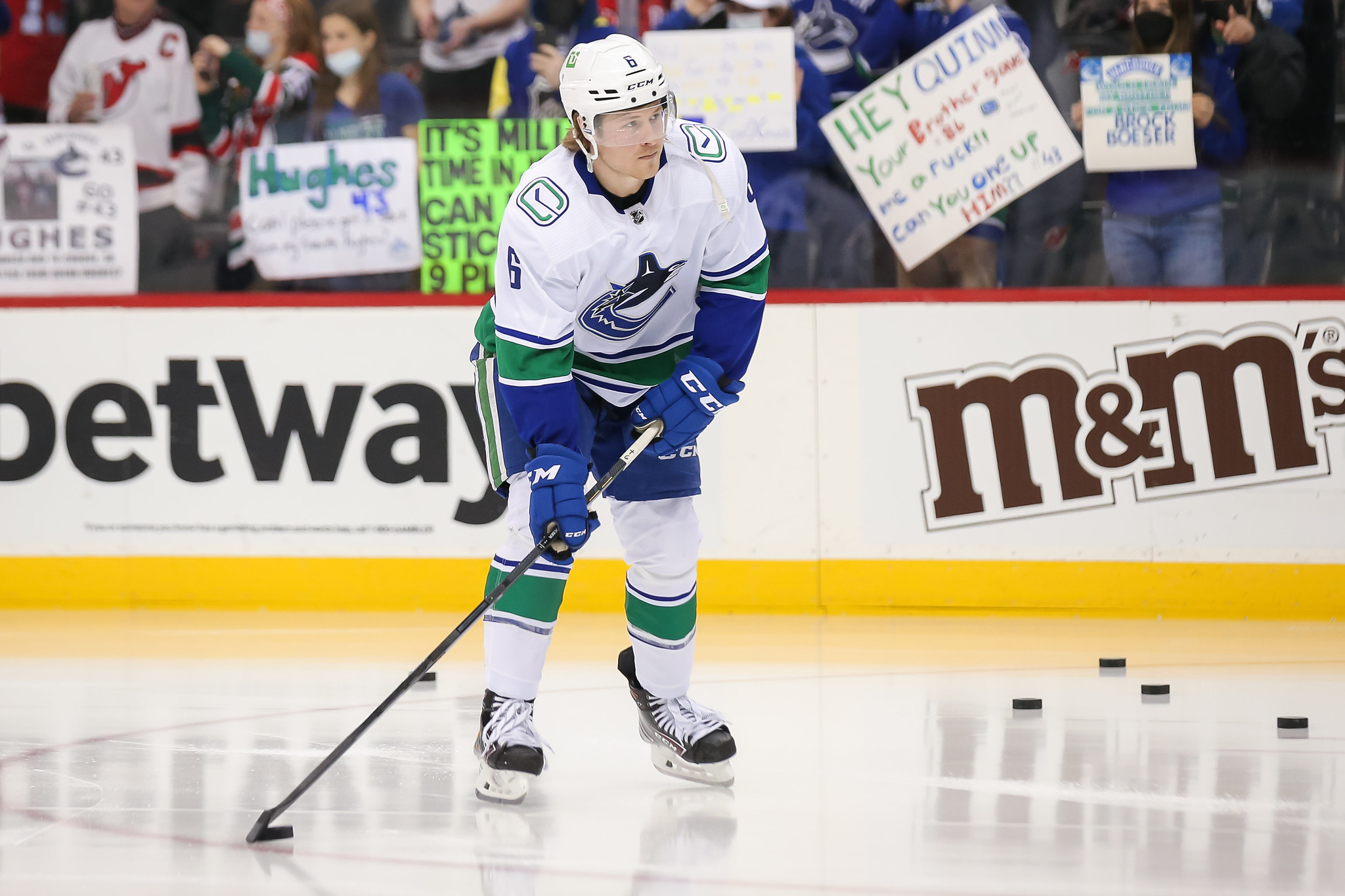 We’re now just a couple of weeks away from the NHL Entry Draft, followed by the free agency period which begins on July 13. There will be many decisions that need to be made for the Vancouver Canucks over this span, starting with one of their pending restricted free agents (RFA), Brock Boeser. While one scenario seems the most likely, the Canucks do have other options for handling his future.

One of three RFA forwards for Vancouver, Boeser had another solid campaign, finishing with 23 goals and 23 assists playing in a career-high 71 games this past season. He’s coming off of a three-year contract that paid him $17.625 million, with an average annual value (AAV), of $5.875 million. Now, it’s already out there that president of hockey operations Jim Rutherford has stated that he will not let Boeser walk for nothing, and that a qualifying offer should be expected, but there are other scenarios out there for the Burnsville, Minnesota native, including a potential trade, qualifying or signing him long-term, and even an offer sheet from another team.

As mentioned earlier, this option seems to be the most likely scenario for everybody, due to the fact that Rutherford said exactly that. “No, we’re not going to let him walk. We recognize he’s a good player. We can figure out a way to fit him in next season with him taking his qualifying offer. Everything gets tricky and difficult, but we can figure it out.” That qualifying offer would be a one-year deal at $7.5 million, and while it’ll push the Canucks close to the cap, Rutherford was confident they’d be able to fit that contract in for the 2022-23 season.

While Boeser is technically an RFA for the time being, the deadline for Vancouver to qualify him along with fellow RFAs Juho Lammikko and Matthew Highmore is July 11. If any of the players are not qualified by July 13, they will become unrestricted free agents (UFA) and have permission to talk with other teams. Though, based on the interviews and interactions with Rutherford and the team, that seems highly unlikely.

Boeser has been a model of consistency for the Canucks since being drafted in the first round (23rd overall) by Vancouver in 2015. He’s had at least 23 goals in four of his first five full seasons and hasn’t scored less than 45 points in any of them. Inking a large extension would make things tricky for signing guys like Bo Horvat and J.T. Miller after next season, however, locking up Boeser long-term could be the best option.

The Canucks currently have just under $10 million ($9.648 million), in cap space to work with after signing Kontinental Hockey League (KHL), star Andrei Kuzmenko. That’s enough to fit Boeser in for the time being, but if they indeed move Miller, that creates another $5.25 million, along with other potential trades and buyout options. Briefly looking at some of the potential comparable wingers’ contracts around the league, players including Winnipeg Jets forward Kyle Connor (25 years old, $7.142 million), Toronto Maple Leafs winger William Nylander (26 years old, $6.962 million), and Carolina Hurricanes star Andrei Svechnikov (22 years old, $7.75 million), could be a few examples of the price range Boeser could land in a long-term deal.

Despite the fact that Rutherford intends to qualify Boeser, that doesn’t mean there aren’t rumours and conversations about the 25-year-old sniper. According to TSN hockey insider Darren Dreger, while it’s not a fire-sale, Vancouver is listening to calls on both Boeser and Miller. “Patrik Allvin has been very busy but the Canucks aren’t just in the market for draft picks. They need good, young players (and) if they’re giving up NHL players in return it’ll be a very interesting off-season for them.”

Miller is coming off of the best season of his career, with 32 goals and 99 points, and while he may have priced himself out of Vancouver, he proved to be one of, if not the Canucks’ best player. Though Miller would net a fortune in a trade, the return for Boeser would also be very interesting. He’s a consistent goal scorer in his mid-20s, coming off of the healthiest season of his career, and a long-term contract would lock him up during his prime years. That could be very valuable for the team that acquires him.

The Threat Of an Offer Sheet

A far less likely outcome in this scenario, but the threat of offer sheets come up every year for a couple of players. We saw it last year with the Hurricanes and forward Jesperi Kotkaniemi, who was signed to an offer sheet from the Montreal Canadiens on a one-year, $6.1 million contract. While there have been others handed out in the past, the last successful one that was signed since Kotkaniemi was Dustin Penner back in 2007 when the Edmonton Oilers signed him to a five-year deal worth $21.5 million.

Will this happen for Boeser in Vancouver? Probably not, but with the number of RFA players seeking new deals, and the level of some of them, it’s always an outside possibility. Whatever the outcome is for Boeser, it should be a very busy offseason in Vancouver, with much of the action occurring in the coming weeks.

I’m a London, Ontario based broadcaster and sports writer for the Vancouver Canucks. I’ve done work in the past reporting on the NHL, NBA and MLB. I’ve also covered the OHL including the Owen Sound Attack and am currently involved with the London Knights.

Leeds closing in on deals for Luis Sinisterra & Tyler Adams