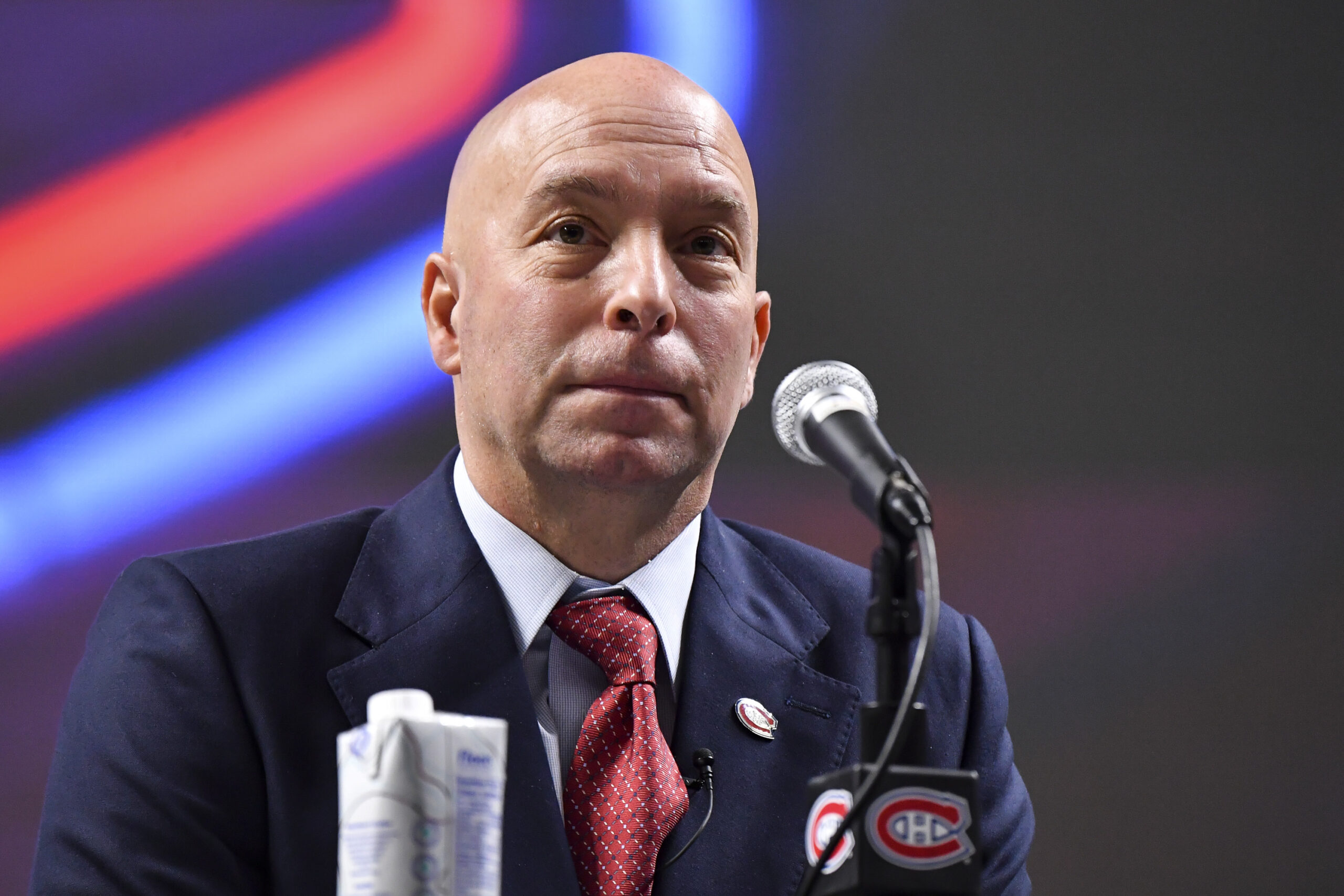 Talking to the media back at the 2022 NHL Combine, Hughes said the NHL Entry Draft is not as critical as July 13, the start of free agency, regarding Price’s situation (to get clarity on the situation). The Habs can only put his contract on long-term injured reserved (LTIR) if they know for sure Price’s knee isn’t good to go. However, if the opposite rings true, it’s not like they’re out of the woods.

It’s ironic in more ways than one. For one example, for over a decade Price in net was always one of the biggest Habs certainties heading into each offseason… especially with his long-term contract, most significantly including 2021 after the team’s run to the Stanley Cup Final (before he missed all but five games of the season).

There’s also the fact the NHL Entry Draft is especially critical as it’s taking place in Montreal… and the Canadiens own the first-overall pick. It also takes the first spot on this quasi-chronological list of Hughes’ top priorities for the summer:

Truth be told, it’s not an absolute certainty (or even necessity) the Canadiens draft the presumptive first-overall pick, Shane Wright. However, Wright does make the most sense for the Habs, by a wide margin.

Nevertheless, even if Hughes goes off the board slightly with some other selection, fans can rest easy first knowing that, whichever way the Habs go, they’re going to get a good prospect, and second that Hughes won’t be dealing that pick away. For Hughes to trade it, with the Draft being in Montreal, it would take a trade partner to move Heaven and Earth.

Ultimately, Hughes has two responsibilities here as GM of the hometown Canadiens. He has to make the best pick possible, but he also has to ensure Habs fans go home happy. That means sticking to the script.

So, no, even if it might be good asset management, if he really likes someone other than Wright, he’s not going to trade down a few spots. In spite of the numerous rumors out there, he’s also exceedingly unlikely to pick anyone other than Wright, but not just because almost everyone expects it.

Wright is just the player who’s widely considered the best prospect and safest pick this draft class. He also happens to be the best fit for the Habs as a two-way center, a position where they’re very weak. So, even though there are no guarantees Wright turns out to be the best player drafted July 7, him being a Hab by July 8 is as close to one as possible.

The Canadiens had been in a position where they could have taken their time trading defenseman Jeff Petry. Hell, they theoretically could have backed the train into the station and reconsidered, realizing their depth on the right side on defense is paper-thin without him. However, that train has kind of departed with Shea Weber traded in exchange for Evgeny Dadonov’s $5 million cap hit.

Whereas Weber’s cap hit would have gone on LTIR, the Canadiens are suddenly $5 million closer to the $82.5 million cap ceiling (so, very close). So, Hughes has to clear space somehow and Petry, who seemingly has one skate out of the Bell Centre already, is simply the likeliest candidate to be moved as a result.

Now, the Canadiens don’t have to trade Petry before free agency, considering teams can go over the cap by 10% during the offseason. It certainly would be preferable to have the additional flexibility though, especially since they’re effectively operating under the assumption Price will be healthy next season for now.

That’s $10.5 million devoted to a single player for the record (one who’s unlikely to keep these Habs afloat in the standings all by himself). It could help (re-)sign other players instead, but, if not Price’s cap hit, than Petry’s $6.25 million will do.

Up front, the Canadiens are for all intents and purposes full up, especially with the Dadonov acquisition. Assuming Jonathan Drouin is ready to go for the start of next season, they own the rights to 14 forwards projected to make the team out of training camp. Those 14 include several restricted free agents, including restricted-free-agent (RFA) Rem Pitlick, who provided a surprising amount of secondary scoring as a waiver-wire pick-up.

Pitlick scored 26 points in 46 games, which equates to a 46-point pace over 82 games. At one point, before he cooled down somewhat, he had scored 20 points in 31 games, a pace that would put him firmly in top-six-forward territory.

Now, no one realistically expects Pitlick to be a top-six mainstay. However, the offense he provides is a theoretical boon to the bottom of the lineup, even if you take his poor defensive numbers into account (from ‘Canadiens by the numbers: Pitlick delivers offence, but D is a concern,’ Montreal Gazette, March 29, 2022).

Ultimately, Pitlick played his way into the Canadiens’ future plans, almost literally. He had been at risk of becoming a Group VI (UFA) unrestricted free agent had he not played enough games down the stretch. As it happens, Pitlick played in 46 of the team’s final 47 games, indicating the Canadiens’ intentions to keep him in the fold. Now come the negotiations.

Michael Pezzetta is another RFA who’s conceivably played his way onto the roster. Granted a lot can happen in training camp and, if anything, Pezzetta projects as someone who would only make it as a 13th or 14th forward (i.e., on the bubble). However, with quasi-exception to Ryan Poehling, who had been expected to make the team out of training camp in 2021-22 (and officially did), Pezzetta played the most games of any call-up (51). That’s got to count for something.

Of course, part of the reason Pezzetta played so much was due to the Canadiens’ historic injury situation. Still, the fact is Pezzetta, a clear-cut bottom-six forward, got the green light over many other potential call-ups, many with more upside. It breaks down like this: The injuries gave Pezzetta the opportunity to play, but Pezzetta himself earned the opportunity to stay, realistically into this coming season.

Pitlick is still the top priority up front, but Pezzetta’s deal may get done first, due to his role being lower down the lineup. He just has less leverage in negotiations as a result, but it should be pointed out that, just because Pezzetta played fewer minutes, it doesn’t necessarily make him less significant or less visible on the ice. After all, there were games he was the only Hab going. And now he’s going to get rewarded.

As it stands, the Canadiens also own the rights to a full complement of defensemen on their unofficial roster past July 13. Even with Petry hypothetically traded, they’d be down to seven. The roster’s theoretically rounded out by 14 forwards (and two goalies, whoever they may be, with Samuel Montembeault having to be re-signed too; He fails to make this list under the assumption Price will play next season).

RFA Alexander Romanov is the top blue-line priority, having just taken home Jacques Beauchamp-Molson Trophy honors. With Petry gone, that would make six under contract, with Corey Schueneman (currently listed as being assigned to the Laval Rocket) and Kale Clague also having to be signed as RFAs.

In theory Clague and Schueneman could battle it out for seventh-defenseman rights, but the Canadiens do have some wiggle room, finalizing their roster. Jordan Harris and Justin Barron could possibly both be cut from training camp for developmental reasons, opening up a few spots, potentially even for another defenseman to be signed via free agency.

In the end, Hughes definitely has a busy summer ahead, but it’s not so jam-packed that he actually needs to sign UFAs to complete his roster. Part of that admittedly depends on Price’s knee and whether he’s comfortable going with a Montembeault-Jake Allen tandem in net in such an instance that his No. 1 goalie can’t play.

However, another part of it is where Hughes assesses his team as being, whether signing a rumored target like Kris Letang would actually be helpful. In one sense, sure, as the Canadiens gave up the most goals against in the NHL and they could stand to improve their defense more than any other position (again assuming a healthy Price).

On the other hand, the Canadiens are theoretically a few seasons away from contending for so much as a playoff spot. So, drastically improving in the short term through free agency makes little sense, especially when UFAs, almost by their very definition, are for short-term improvement only.

All in all, it’s shaping up to be a long 2022-23 for Habs fans, similar to 2021-22, but not for lack of progress by Hughes (and executive vice president of hockey operations Jeff Gorton) this summer. Hughes is laying the foundation for a winning team to the point it could probably stand to be longer too. He’s obviously got a lot of work to do and a finite amount of time in which to get it done. As long as he tackles the top priorities first, he (and the Habs) should be fine (just not right away).

After 10 years of writing hockey, Ryan decided it was as good a time as any to actually join The Hockey Writers for the 2014-15 season. Having appeared as a guest on such programs as CBC Radio One’s Daybreak, Ryan has also written for the Montreal Gazette and Bleacher Report and worked for the NHL itself and his hometown Montreal Canadiens. He currently writes about all things Habs for THW, with it being a career highlight for him to have covered the 2021 Stanley Cup Final as a credentialed member of the press.