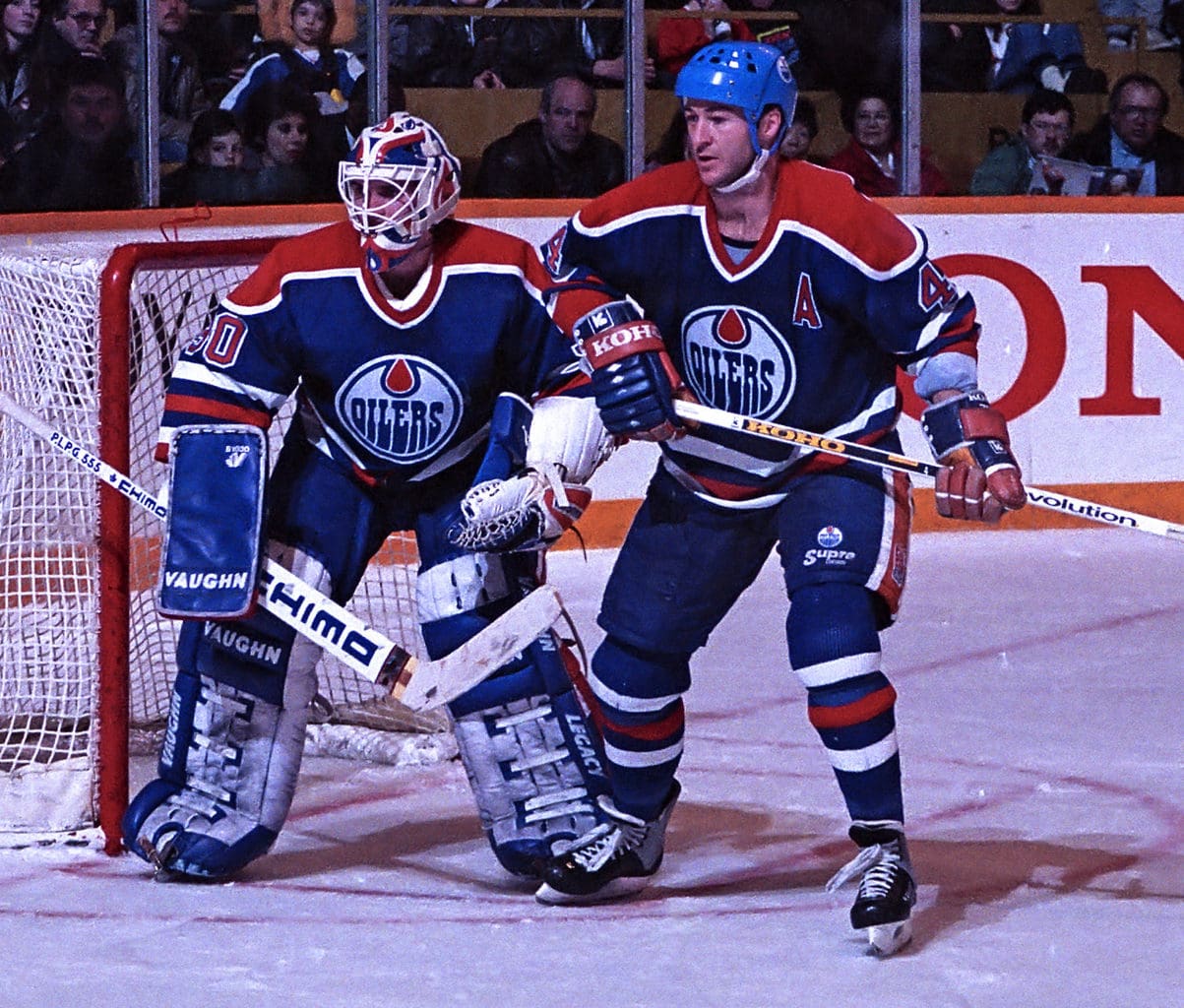 Goaltending: hockey’s most precarious and polarizing position. The masked men often take the blame when the team loses, and receive little credit when they win. They face 100 MPH slap shots, and 200-pound players barreling into them. They’re quirky and unique, but no team can get by without a good one. The Edmonton Oilers had the benefit of many great goalies throughout the years. Here are three of the best.

Drafted by the Oilers 132nd overall in 1980, Andy Moog isn’t the first name that comes to mind when assembling the team’s greatest players. He suited up for the Oilers in five seasons, where he played in a tandem with fellow legend Grant Fuhr. Despite Fuhr getting the majority of the recognition in the Oilers dynasty discussion, Moog was in net when the Oilers won their first Stanley Cup in 1984.

Moog had a better save percentage, and a better winning percentage in three out of those five seasons, but Fuhr ended up with the lion’s share of postseason play. The lack of ice-time led Moog to ask for a trade, which he was granted in 1988. The Oilers moved Moog to the Boston Bruins for another goalie, Bill Ranford.

Moog’s stint with the Oilers is somewhat overshadowed by the presence of Fuhr, but there’s no doubt about his impact on the team. In fact, some would argue that the Oilers would still have won their five Cups with Moog as the starter rather than Fuhr.

“Not only did Moog win three Stanley Cups during the Edmonton Oilers dynasty years (Moog was a member of Edmonton’s championship teams in 1984, 1985 and 1987), but he also played in the Finals on three other occasions. In Edmonton, there were just too many great names during those dynasty teams and everybody remembers Grant Fuhr as the cornerstone in goal. Moog gets forgotten.” [Musings of a Hockey Enthusiast]

Recently named one of hockey’s top 100 players, Fuhr easily makes the list of all-time best Oilers goalies. Known for being “clutch” in the playoffs, Fuhr boasts five Stanley Cup rings and a Vezina Trophy. The Hall of Fame goalie faced difficulties in his personal life, but found the road to redemption, and remains known as one of the best netminders of his era.

“During his prime, Fuhr’s GAA ranged from a low of 3.43 to 3.91, which is extremely high for someone who is supposed to be the “best goalie in the world.” But considering the Oilers’ run and gun style and Fuhr’s lack of support on many nights, those numbers are very respectable.” [Greatest Hockey Legends]

Always a fan favorite, Fuhr made a name for himself in the 1987-88 season when he finished second in voting for the Hart Trophy. Considering the high rate of goals on any given night, and the less than stellar save percentages of the era, that a goaltender was even mentioned for the MVP was a feat in itself.

The ’80s Oilers run and gun style would have been a nightmare for any goalie, but Fuhr always found a way to make the key saves that his team needed. He was known for having a hybrid style and cat-like reflexes, and despite his numbers not leaping off the page, he was the goalie you wanted backstopping you when it came to the postseason.

“Come playoff time, everybody knows if you can put somebody in front, every shot’s going high. With the hybrid, you’re not really sure what a guy’s going to do: be aggressive, be a bit more passive. He may stand up, he may go down. It just gives you more options to play the game.” – said Fuhr of his style. [NHL]

When Grant Fuhr went down with a shoulder injury early in the 1989-90 season, the Oilers turned to back-up goalie Bill Ranford to carry the load. What they feared may be a drop-off in performance turned out to be the exact opposite. Ranford was spectacular, leading the Oilers to a Stanley Cup championship in 1990. Ranford won the Conn Smythe Trophy that year for playoff MVP.

At the start of the 1991-92 season, Ranford was perhaps the finest goalie in the world. He was named Canada’s starter for the 1991 Canada Cup, and not only did he lead the team to victory, he was named the outstanding player of the tournament. His standup style was different from most young goalies, but for him it was effective. [Legends of Hockey]

Ranford’s run of success wasn’t as lengthy as Fuhr’s, but during his prime years with the Oilers he was truly considered to be the best goalie in the world. Ranford was acquired in a trade for Moog, and was largely expected to be Fuhr’s back-up. But when given the opportunity, he seized it, and made a name for himself in Oilers lore.

bill ranford was one of the best goalies the Oilers ever had with #31 Fuhr and #35 Moog, even though Moog’s career with Edmonton was short.

Recent Oilers history hasn’t been kind to goalies. In fact, it’s been their Achilles heel for the past decade. They had a young man in Cam Talbot who had been outstanding as an Oiler, but they traded him to the Calgary Flames on Feb. 16 2019.

The archives of THW contain over 40,000 posts on all things hockey. We aim to share with you some of the gems we’ve published over the years.