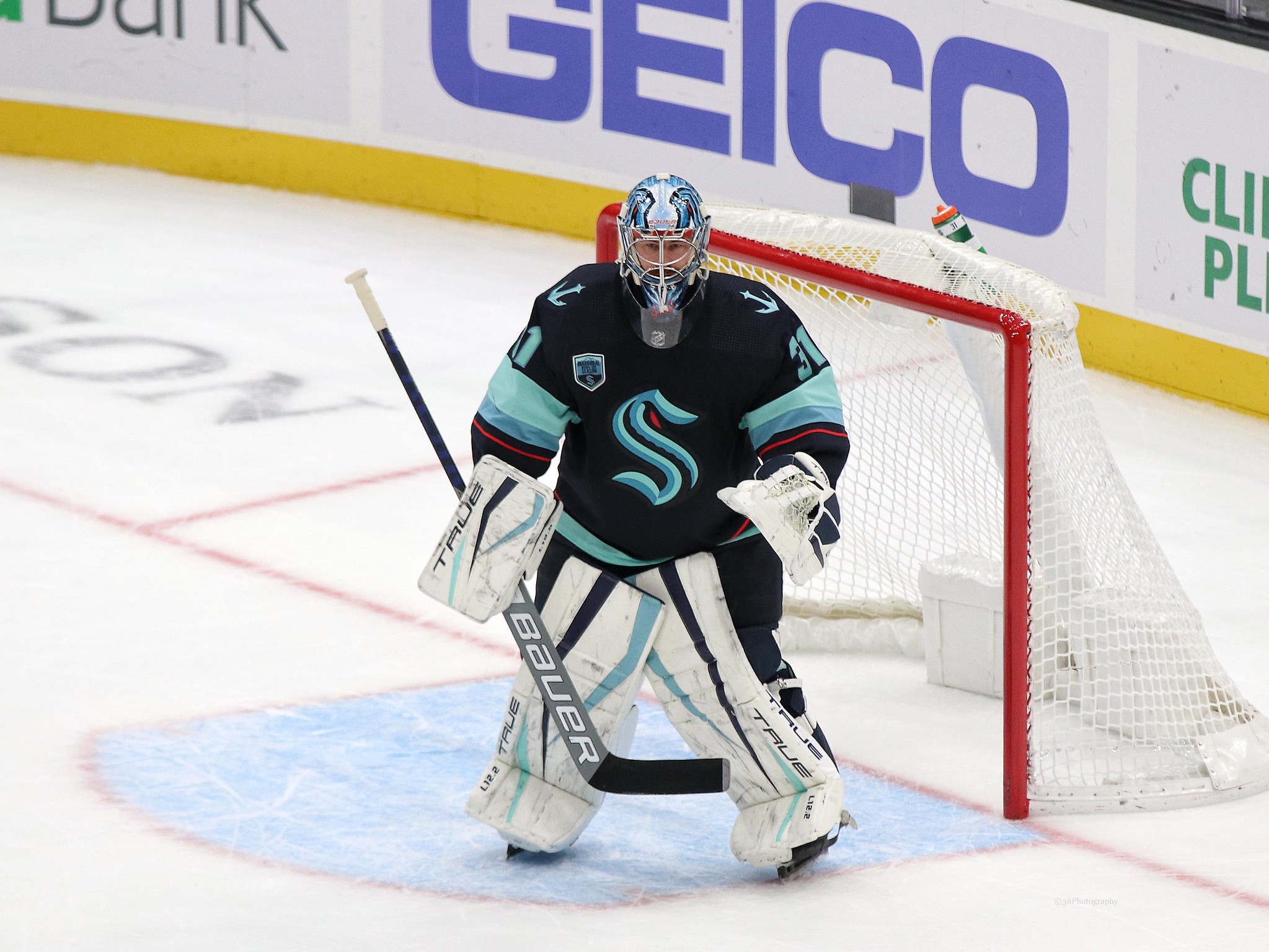 In the first of a mini-series covering the top-10 most overpaid players at each position, we kick off the first with goaltenders. This is made up of NHL netminders who have been paid a good amount but their stats and performance have not matched. It is heavily relied on the goaltenders’ performance from this season, with some carryover from recent years.

Coming in at 10th is Sergei Bobrovsky of the Florida Panthers. I mention the team right off the bat because they are a big reason for the numbers he’s put up. A former two-time Vezina Trophy winner and not too old yet, he still has played well. But his massive contract he signed will still be held over him unless he can be in the top three in Vezina voting year after year at this point in his career.

$10 million for four more years is a lot, but that’s sometimes the price you have to pay to land an impactful player in free agency. With the flat cap and a very good team where players are going to need to be paid, anything less than spectacular and consistent isn’t worth it with this money. Maybe if he can take the team to the Stanley Cup then he would drop off this list. But for now, despite having the best stat line of any player on this list for this year with a 2.56 goals-against average (GAA) and a .916 save percentage (SV%), he will continue to hold a spot.

Elvis Merzlikins has had great games and also some bad stretches. He is on a team that not many people would’ve thought would be competitive. He has held his own and despite a high GAA of 3.40, is still sitting at a .904 SV% with two shutouts and a positive record.

The reason he is a bit lower on this list with the numbers he has put up this year is because he only makes $4 million this season, but it goes up to $5.4 million for five seasons after. The other reason as I already mentioned is the team he plays for in comparison to some of the team’s other goaltenders are gifted with playing in front of.

Linus Ullmark hasn’t had the best of seasons after putting up better numbers in previous seasons in his career on the Buffalo Sabres. He owns a 17-9-1 record but on a team like the Boston Bruins who sit 10th in the league in points and sixth in goals against, his stats should be much better.

Ullmark has been pushed aside by Jeremy Swayman and isn’t the team’s starter anymore. Making $5 million for three more seasons after this one, he’s turning into a pretty expensive 1b or backup for the Bruins. Ullmark had a stretch where he was improving his numbers while Swayman wasn’t playing the best, but the start of the year wasn’t great and neither has his recent play, failing to win two in a row since mid-January.

If it wasn’t for a recent hot streak Matt Murray went on, he would be much higher on this list. After his abysmal start to the season that got him sent down to the American Hockey League (AHL), he got the call once again and finally won his first game of the season on Jan. 13 after going 0-6-0.

Murray went on a streak of 5-2-2, allowing three or more goals just twice after doing so in every game but one at the start of the season. He also earned himself a shutout. His last five games have all been losses, but he can’t be to blame for all of them. Despite his impressive streak of nine games, he wasn’t with the team this season for a couple of months due to his poor play, not worth it when paying him $6.25 million this year and for two more after.

Murray has a record of 5-11-2 with a 2.78 GAA and a .915 SV%. He is only 27 years old and has plenty of time to continue to turn things around in his career. If he stays on the path he’s on since returning from the AHL, he may be worth most of the money.

Mikko Koskinen was overpaid from day one when he was offered a contract he couldn’t refuse after only playing part of the first season back in North America with the Edmonton Oilers. He is a backup goalie and was given starter money, while only regressing since he first signed his contract.

Despite the wins coming in for him this season, his underlying stats have only given the Oilers a good chance to win some of the time. If it wasn’t for his recent run of 7-0-2, he would be without a shutout, have a sub-.900 SV%, and only be 12-8-1. But now he has a record of 19-8-3 and has the best road record in the NHL at 12-2-3, somewhat indicative of the team playing in from of him and being able to outscore the opponents. At times he has shown he is worth the money, but it hasn’t typically lasted long and overall not worth $4.5 million. His contract is over at the end of the year, so he likely won’t appear on this list next season. He is the only goaltender appearing on this list whose contract is ending.

We have not seen the same Jordan Binnington that took the St. Louis Blues on his back all the way to the Stanley Cup just a couple of years ago. He put up average numbers the following two seasons to earn him another contract, this time at a higher AAV (average annual value) and term, $6 million for six years. We are just in year one of the deal and the team has a backup stud in Ville Husso outplaying him and getting paid $750k to do so.

Binnington’s win/loss is only positive due to his team playing very well all-around this season. In only 14 of his 26 starts, he has posted a SV% over .900, and he has only had 10 quality starts (.385 percent), well below the league average of .530.

With the term and money being given to Binnington this year and beyond, his .904 SV% and 3.12 GAA has not been worth it, especially when they are going to have a tough time paying Husso after this season and will have to stick with Binnington.

Petr Mrazek is another overpaid backup goaltender that is having a much different season than he had for the Carolina Hurricanes. Among goalies to have played at least 14 games this season, he ranks fifth-worst in SV% with .890. This is on a team too that is fifth in the league based on points percentage.

Making $3.8 million for this year and two more, he was brought in to support Jack Campbell in Toronto but Campbell took full control of the crease and the team overplayed him because Mrazek’s stats were so underwhelming and he wasn’t able to stay healthy.

Now that Mrazek is back and healthy, he has been given a little more starts due to the recent play of Campbell. Mrazek has not impressed since and despite having a record of 9-5-0, he’s had just three quality starts and has posted a 3.22 GAA to go along with his low SV% and a minus-6.9 GSAA.

The first of two Seattle Kraken goaltenders this season, Chris Driedger was supposed to be a part of one of the best goalie tandems in the NHL this season with the Kraken putting emphasis on the defensive side of the game through the expansion draft. That has not been the case, as they have been the worst. Despite being a backup, they definitely overpaid for Driedger’s services to serve as such, paying him $3.5 million for three seasons.

Despite being 5-8-0, he has just four quality starts and has a minus-7.3 GSAA (goals saved above average). I mentioned above how Koskinen is being overpaid as a backup, but at least he has played the games to be considered a starter and put up better numbers. Driedger has a 3.28 GAA and .891 SV%. The Kraken could have definitely made better decisions drafting and choosing their players and making sure not to overpay players for too long.

Despite Carey Price not dressing for a single game this season, his contract and his obvious decline over the past few years are noticeable. He did take the Montreal Canadiens to the Stanley Cup Final with a .924 SV%, but he has always stepped up when the playoffs have come around. It’s getting there and helping his team get in a good position to succeed that has become more difficult.

The only thing Price can be blamed for this year is not giving the Canadiens more stable goaltending. Even if he returns, there are still four years remaining on his deal that pay him $10.5 million AAV. Unless he can put up Vezina Trophy numbers, that isn’t worth it and he is overpaid for being 35 years old.

Last season, he barely cracked a .900 SV% on a decent Canadiens team that had a healthy Shea Weber in front of him while playing in a weak North Division. Price also ended the regular season with a minus-4.3 GSAA, well off from his plus-108 career GSAA. He finished a season negative in that department for just the fifth time in his career. The Canadiens are hoping to get Price back healthy and in top form, because it will be very difficult to move that contract if he isn’t playing good hockey.

Number one on this list, and deservedly so, is Philipp Grubauer, who the Kraken signed for six seasons. He has by far been the worst goaltender this season posting a GSAA of over 10 worse than the next closest netminder. His record is bad, but that can also be attributed to the team in front of him, while his SV% is .888, also one of the worst in the NHL.

To be paid this much money and be the worst goaltender statistically in the NHL is why he is clearly the most overpaid goaltender this season.

Any surprises above? Let me know in the comments if you agree with the list or who should be switched around.

Rob Couch is a THW freelance writer covering mainly the Edmonton Oilers and Philadelphia Flyers. He covers everything you need to know about fantasy hockey. He will also keep you up to date with NHL Stats News and trade talks from around the NHL.

You can find more of his work here.