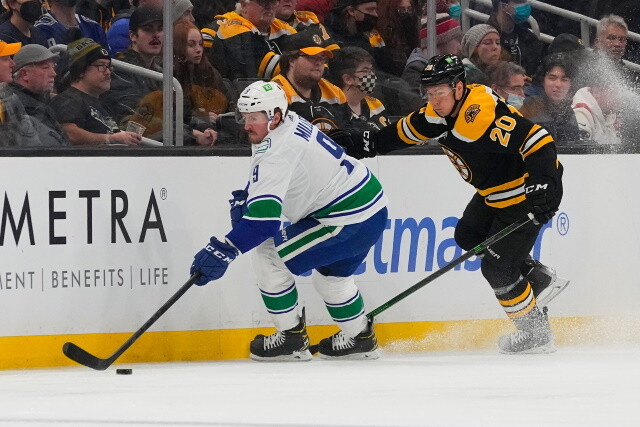 Rangers and Canadiens eyeing each other?

Pierre LeBrun: Keep an eye on the New York Rangers and Montreal Canadiens leading up to the NHL trade deadline.

The Canadiens would rather add prospects instead of more draft picks. They have 12 picks for the 2022 NHL draft.

Larry Brooks: “Perusing Montreal’s presumably available personnel, there isn’t a player for whom I’d trade more than a mid-level prospect to acquire. Cap/talent/fit not there. Maybe Gorton still covets Hajek.”

Would the Rangers or Bruins pay the price for J.T. Miller?

Larry Brooks: (thread) “J.T. Miller’s trade value increases only if an acquiring team wants to meet Vancouver’s price. There is no law that says the Rangers are now going to throw Schneider or Othmann or Cuylle into the deal just because Calgary may have overpaid for Toffoli.

If Canucks get greedy and do not move him, Miller’s trade value will diminish over the offseason when acquiring team would get him for one playoff run rather than two.

Me, I think if Drury has prioritized Miller, then Lundkvist and Chytil comprise a pretty good return.”

Joe Haggerty of Boston Hockey Now: The Tyler Toffoli trade to the Calgary Flames helps set the price that the Vancouver Canucks may hope to get for forward J.T. Miller. Miller has another year left at $5.25 million.

If the Bruins were to acquire Miller it may cost them a first-round pick, and an additional pick, a prospect like Jack Studnicka and a roster player like Jake DeBrusk.

Would the Canucks demand Fabian Lysell over Studnicka?

The Bruins need a No. 2 center. Philadelphia Flyers Claude Giroux and Ottawa Senators Chris Tierney are two other centers that could be available.