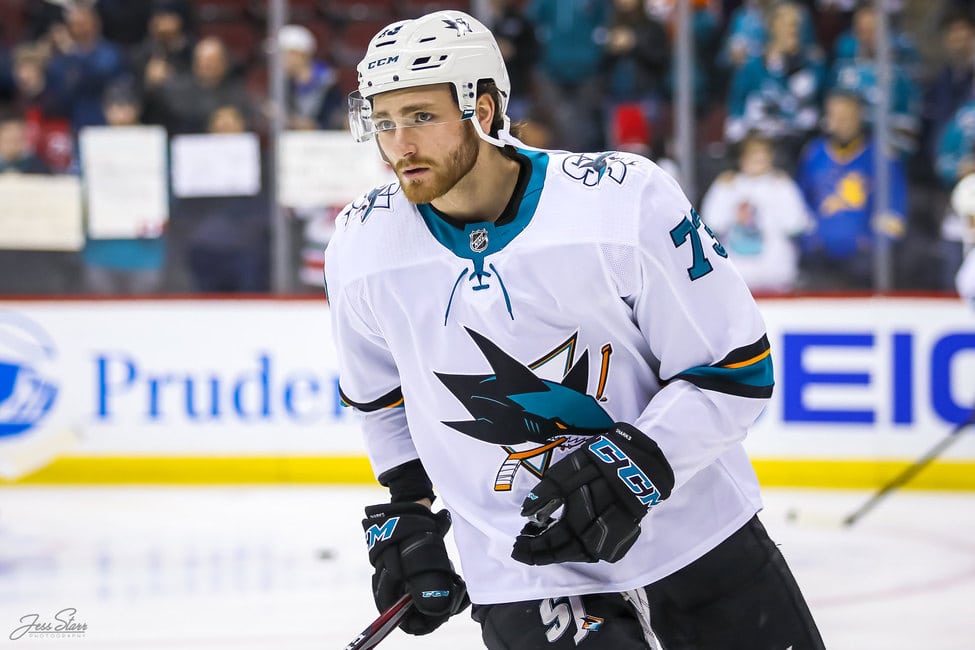 “TI-MO! TI-MO! TI-MO” chants rained from the SAP Center in the third period of the San Jose Sharks game against the Los Angeles Kings. Obviously, that was in reaction to Meier’s stellar performance, where he put five goals behind Jonathan Quick in the first two periods.

The other goal from the Sharks’ 6-2 victory against the Kings came via Rudolfs Balcers, who has two goals in two games since returning from injury. He immediately replaced Alexander Barabanov, who has had an impressive first full NHL season, on the top line after testing positive for COVID-19.

Partnering either of those wingers with Meier and Tomas Hertl, whose been stellar in his final year before hitting unrestricted free agency, has resulted in a stellar top line as of late. Those players have combined for 13 goals in the last six games, with 11 of those coming at even strength.

Related: Sharks Must Give Ryan Merkley an NHL Roster Spot

The rest of the roster has not produced adequately, especially recently. The second, third, and fourth lines have just three goals to show for their work in the last six games. While the team should have both Balcers and Barabanov in the lineup Thursday for the first time since Dec. 3, the recent offensive output for the Sharks must improve for the team to be competitive in the Pacific Division.

Jonathan Dahlen, Meier, and one of Barabanov or Balcers have been the wingers recently in the Sharks’ top-six. When Balcers left with an upper-body injury, Sharks head coach Bob Boughner turned to the speedy Noah Gregor to fill into the second line. Despite dominance in the American Hockey League (AHL) this season, he’s slumping with four assists and 12 points in eight games.

Since Dec. 5, when he entered his larger role, he has just three assists in 16 games. From just a points perspective, that’s far below expectation. But, I feel Gregor has hit a horrible cold streak. After shooting between 8-9% in his first two NHL seasons, his shooting percentage has dropped to 1.4%.

Gregor is already sixth on the team in shots, producing almost three per game. If he shot his 8.3% he held last season, the youngster would have six goals this season, but he has just one. Per MoneyPuck, Gregor has the second-best expected goals per 60-minutes on the Sharks, behind Meier. The shooting slump has seen the team and him not rewarded for his efforts.

Boughner has massive trust in his third line. Currently comprising of Nick Bonino, Matt Nieto, and Andrew Cogliano, they have been tasked to shut down the likes of Sidney Crosby, Artemi Panarin, Claude Giroux, or whoever is the primary offensive threat on the opposition.

And, there’s nothing wrong with the Sharks using them in primarily defensive roles. But the Sharks will never receive the depth scoring they need if they attach three offensively ineffective players together. For reference, last year’s primary defensive forward, Dylan Gambrell, produced a higher points-per-game last season than Bonino and Nieto this year.

The Sharks play Bonino nearly 17 minutes a night, with a chunk of that on both special team units. Regardless, he needs to have more offensively gifted wingers to pot the occasional goal and keep the Sharks in games. I would love to see Balcers or Gregor possibly moved down to that line when Barabanov returns from protocol.

The Sharks have offensively gifted players that I feel deserve extended stints in the team’s middle-six. While having a shutdown line can be great, per MoneyPuck, Nieto-Bonino-Cogliano creates only 1.96 expected goals per 60-minutes. The Sharks need to add larger scoring threats than Cogliano, Nieto, Jeffrey Viel, and Lane Pederson.

Nick Merkley, weirdly, has not stuck in the NHL lineup. With a goal and two assists in nine Sharks games, primarily coming when the Sharks faced large COVID issues in late October, I thought he would have stuck. He’s tallied six goals and 17 points in 22 AHL games and could be a third-line scoring option for San Jose.

Scott Reedy only slotted into the fourth line in his five games of NHL action. This is odd, considering he’s been the most consistently scoring Barracuda forward in his first professional season with a team-leading 16 goals and 25 points. The University of Minnesota alum could warrant more minutes with this consistent scoring pace.

John Leonard, who possessed a decently large role last season with the Sharks, has started improving after a poor start on the Barracuda. In the previous 10 games, he’s averaged 3.3 shots per game. He has two goals, both shorthanded, and two assists in his last six games. Expected-goals models, like JFresh’s, were also complimentary of his defense in the NHL last season.

The Barracuda leading scorer last season with 12 goals and 22 points, Joachin Blichfeld, has yet to be called up. In 2020-21 he also had an NHL goal in five games. He’s more of a pure sniper but could see another call-up if he gets hot at some point this season.

Sharks Prepping for a Tough Stretch

After tomorrow’s contest versus the Seattle Kraken, the Sharks will be facing some of the NHL’s best teams. Nine of the club’s next 12 opponents are currently in a playoff spot. The team’s upcoming four-game road trip features the first, third, fourth, and ninth-best teams in the league by point percentage.

The Sharks will need to hope the boost from Barabanov’s return will be enough to propel their scoring to come from more practical means. To me, the team could be a Meier or Hertl dry spell away from losing their hopes of a playoff spot. By having more scoring threats throughout the lineup, the Sharks can push for a divisional playoff spot, which they are only a point away from.

What do you make of the Sharks’ offense as of late? Let me know in the comment section below!

Josh Frojelin is a young writer from the Bay Area. Josh grew up as a Sharks fan, being introduced to hockey by his father. He is now attached to his phone, waiting to hear the latest in hockey news. In addition to writing, Josh loves theatre, and his corgi Rocky.